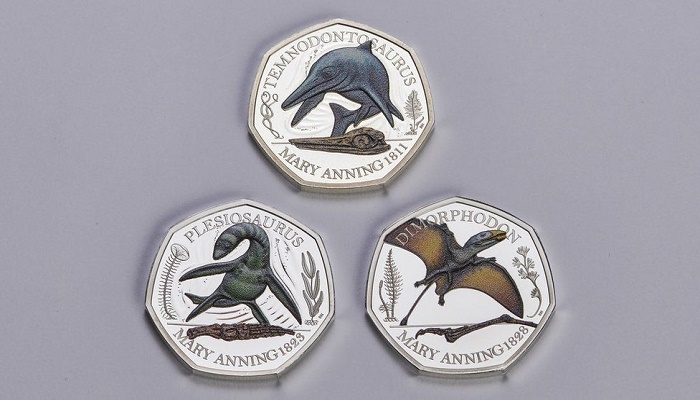 The life of 19th Century fossil hunter Mary Anning is being celebrated with a new commemorative 50p coin collection.

But her achievements were often overlooked at a time when the scientific world was dominated by men.

Anning, who was born in 1799, was the child of a poor family and had nine siblings when she started helping her father collect fossils which he sold to tourists.

Her father died when she was 11 years old but she continued his work and, despite a lack of formal education, began teaching herself about geology and anatomy.

It was a year after her father's death that Anning discovered the skeleton - now known to be an ichthyosaur - that helped propel her into the history books.

The new coins are part of the Royal Mint's Tales of the Earth commemorative 50p series, which have been created with the Natural History Museum.

Clare Matterson, from the museum, said the collection "celebrates a pivotal figure in the understanding of palaeontology, important contributions to science that were rarely acknowledged in Mary's lifetime".

The coins were designed by paleo-artist Robert Nicholls and feature augmented reality (AR), which was first used by the Royal Mint in 2020.

After receiving the coin, collectors can use AR to scan the packaging to unearth facts, clips and images about the prehistoric beasts.

The coins will be available to buy on the Royal Mint's website.