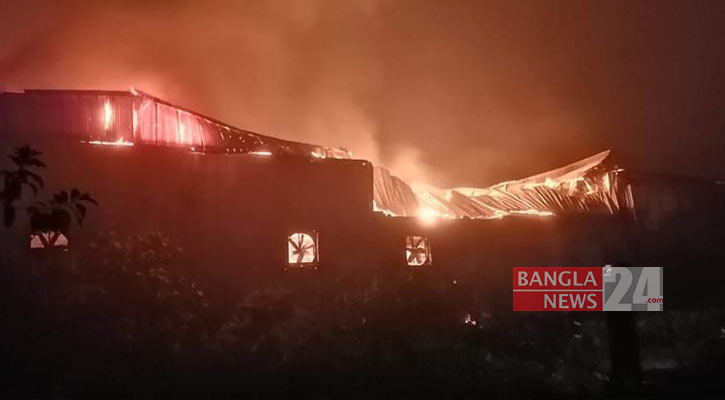 A massive fire broke out at a leading food manufacturing factory at Pachgachiya Kashimpur in Sadar upazila of Feni around midnight on Wednesday.

Fortunately, no casualties have been reported. Fire officials said that some 800 workers who were present at the Star Line Food Products factory at the time of the fire managed to come out safely.

Purna Chandra Mutsuddi, deputy assistant director of Feni Fire Service and Civil Defence, said on Thursday that the blaze started at the factory around 12 am and soon spread to the adjacent sheds.

As many as nine fire tenders were pressed into service and the fire was brought under control around 5 am.

Senior Station Officer of Feni Fire Service and Control Room, Zakir Hossain, however, said the firefighters managed to douse the flames fully around 8 am on Thursday.

A three-story building of the factory tilted during the fire, he said, adding a probe has been ordered to ascertain the exact cause of the inferno.

Traffic on the Dhaka-Noakhali highway remained suspended for sometime due to the fire at the factory. Traffic has now resumed on the highway, officials said.

Zafar Uddin, executive director of Star Line Food Products, said, “A total of 1,500 people are employed with the factory that produces biscuits, burger, pastry and sweets.”

The estimated loss caused by the fire could go up to Tk 25 crore, he added.