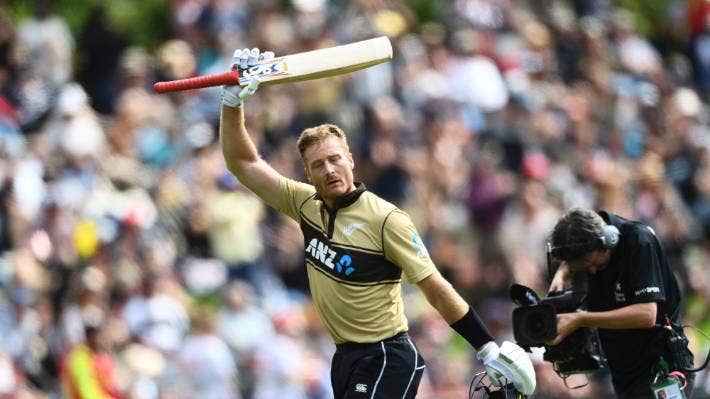 New Zealand set Australia a challenging target of 220 as Martin Guptill returned to form with a blistering 97 in the second one-day international in Dunedin on Thursday.

The Black Caps finished their 20 overs at 219 for seven after losing the toss and being put in to bat at University Oval.

Kane Williamson's men, who won the opening match by 53 runs, made the most of the venue's short boundaries although the Australians fought back in the final overs.

Guptill's innings gives him the record for the most sixes in Twenty20 internationals with 132, taking him past India's Rohit Sharma on 127.

The 34-year-old clubbed eight sixes, bludgeoning all comers in the Australian attack.

He fell just short of his third T20 century after being caught on the boundary trying to hit a Daniel Sams delivery out of the ground.

Guptill averaged only 17 in the recent series against the West Indies and Pakistan, then managed just 11.5 in the domestic competition before picking up a hamstring injury.

Pressure on the opener intensified when he made a duck in the first match against Australia on Monday, with calls for uncapped Finn Allen to join the squad.

But he answered his critics with a return to his big-hitting best, bringing up 50 off 27 balls, with eight boundaries, including four sixes.

While Guptill provided fireworks at one end, Kane Williamson was steady at the other, scoring 53 off 35 balls.

The end of the 131-run partnership did not halt New Zealand's momentum, with Jimmy Neesham hitting three sixes from the first four balls he faced.

Neesham finished at 45 not out from 16 balls after smashing a total of six sixes.

Kane Richardson was the pick of the Australian bowlers, taking three for 43.