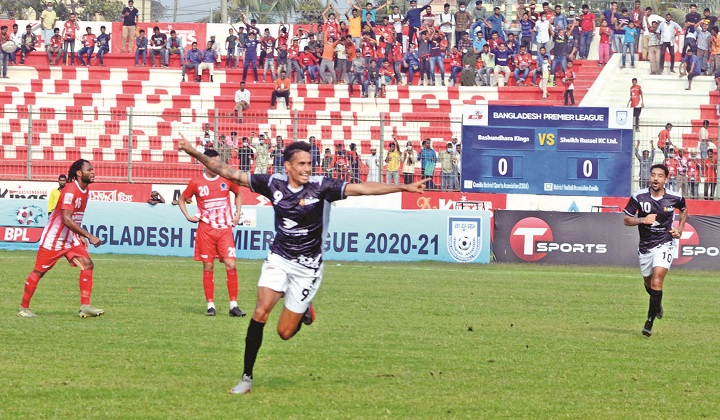 Table-toppers Bashundhara Kings extended their unbeaten run to 11 matches in the ongoing Bangladesh Premier League with a massive 4-0 win over Sheikh Russel Krira Chakra in their home match at the Shaheed Dhirendranath Dutta Stadium in Cumilla on Wednesday.

Raul opened the account for Kings with the assistance of Robson Robinho in the 23rd minute (1-0) while Robson doubled the margin utilising a pass from forward Tawhidul Alam Sabuz before the half-time in the 42nd minute (2-0).

In the second half, Raul extended the margin 3-0 netting his second goal with the assistance of Iranian defender Khaled Shafiei in the 74th minute. Robinho sealed the fate of the game scoring his second goal in the 83rd minute (4-0).

The defending champions now remain unbeaten for 16 matches, including five games of the season’s curtain-raiser Federation Cup, in the ongoing domestic season. Among these, the country’s top outfit won 15 and drew one.

After the day’s important win, the holders earned 31 points from 10 wins and one draw in the league.

On the other hand, Sheikh Russel remained in the fourth position with their previous credit of 17 points.

The defending champions Kings will take on runners-up Dhaka Abahani Limited in their last match of the first leg on February 28 at the Bangabandhu National Stadium.

In the day’s other match, Saif Sporting Club beat Uttar Baridhara by 2-1 goals at the BNS.

Nigerian forward John Okoli and midfielder Sazzad Hossain scored one each for Saif SC in the 44th and 89th minutes while forward Arif Hossen netted one Uttar Baridhara in the 20th minute.