England collapse to 112 all out in India pink-ball Test 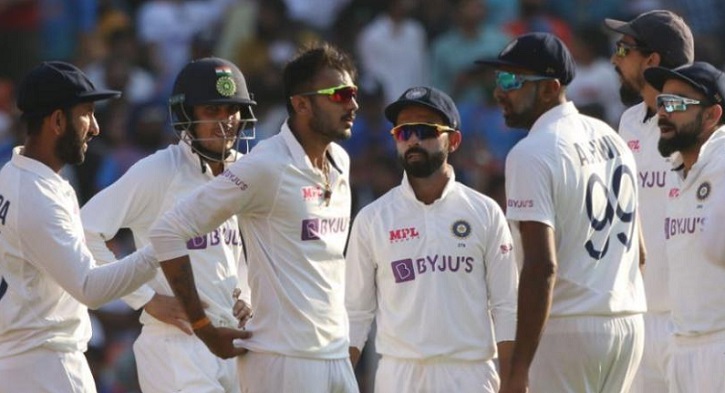 Spinner Axar Patel claimed six wickets as India skittled out England for 112 on day one of a crucial day-night third Test in Ahmedabad on Wednesday.

Patel, who recorded his second haul of five or more wickets in just his second Test, combined with Ravichandran Ashwin to end England's innings in 48.4 overs in the world's biggest cricket stadium.

India's innings witnessed a power cut with most of the new LED lights at the revamped stadium going off for two minutes after which play resumed.

India reached five for no loss at dinner with Rohit Sharma, on five, and Shubman Gill at the crease.

Gill survived a scare when he was caught at second slip off fast bowler Stuart Broad but replays suggested that Ben Stokes had grassed the ball while taking the catch.

The England batting fell apart after fast bowler Ishant Sharma, playing his 100th Test, struck first with the wicket of Dom Sibley for nought in the third over of the day.

Crawley put on 47 runs with Root for the third wicket to put up some resistence but Ashwin claimed the England captain with his off spin.

Root reviewed the call but replays showed the ball would have hit the top of leg stump and he left the field to the loud cheers of the home crowd.

England took tea at 81 for four and wickets kept falling in the second session.

Foakes stood guard for 58 balls before Patel bowled the wicketkeeper-batsman to wrap up the innings. Ashwin took three wickets.

England, looking to bounce back from a 317-run defeat, have brought back their pace duo of James Anderson and Archer in the team.

The four-match series is level at 1-1.