Banker beaten to death by workers in Sylhet 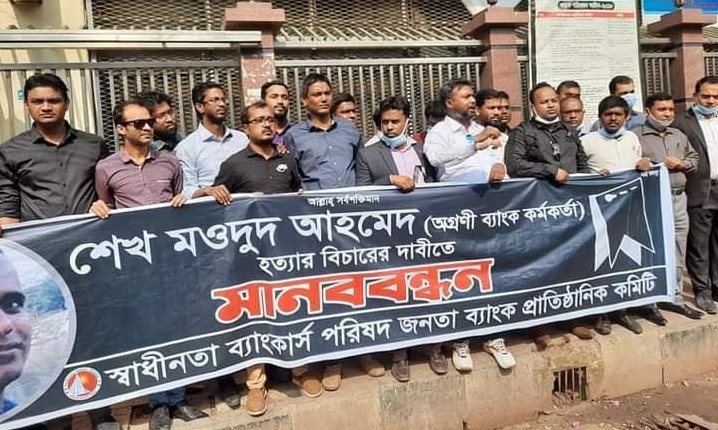 Bank officers of different state-owned banks on Wednesday staged demonstration and formed a human chain demanding punishment of the culprits over the killing of Agrani Bank officer Moudud Ahmed in Sylhet.

The bankers formed a human chain and stage a demonstration under the banner of “Swadhinota Bankers Porishad”, an organization of bank officials of different banks, in front of Janata Bank head office at Motijheel in the capital, said a press release

The speakers demanded immediate arrest of the killers of Moudud Ahmed and ensure quick justice for the brutal killing of the banker.

It was learnt that on Saturday afternoon, Agrani Bank’s Haripur Gas Field Branch’s officer (cash) Moudud Ahmed hired a CNG-run auto-rickshaw from Haripur area of Sylhet’s Jaintiapur upazila to go to Bandarbazar in the city.

Upon reaching there around 7:45pm, he locked into an altercation with the driver over fare. He was then beaten badly by the driver and his transport worker associates.

Later, Moudud (35) died at Sylhet MAG Osmani Medical College Hospital that night, hour after he was taken there by locals. Victim’s brother filed a case with Kotwali Police Station on Sunday.