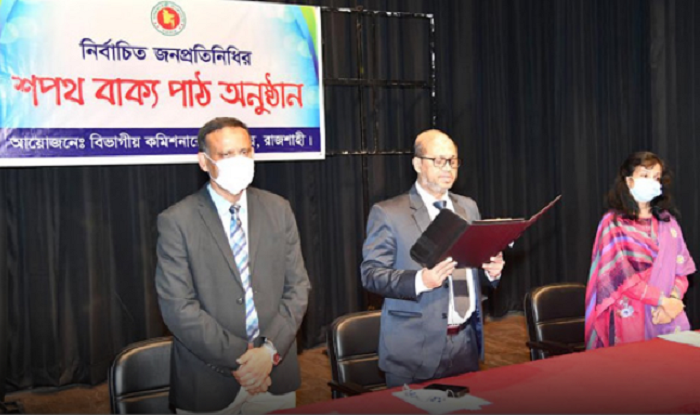 Twelve mayors, 39 women in the reserved seats and 117 councilors in general seats elected through the recently concluded pourashava election in different districts under Rajshahi division took oath today with a vow to serving their respective grassroots people with utmost sincerity and honesty.

Commissioner of Rajshahi division Dr Humayun Kabir administered the oath held at Shilpakala Academy auditorium attended by the newly-elected local government representatives along with their scores of supporters and followers from 12 pourashava in Pabna, Rajshahi, Chapainawabganj, Naogaon,
Natore and Bogura districts.

Hosted by the commissioner’s office of Rajshahi division, the oath-taking session was followed by a meeting with Divisional Director of Local Government Division Dr Ziaul Haque in the chair.

Dr Kabir urged the newly-elected mayor and councilors to render their services with the commitment of building the nation free from all sorts of curses like corruption, terrorism, extremism and drug-addiction.

He said the public representatives have a pivotal role towards reaching the public services to the grassroots people effectively as the present government of Prime Minister Sheikh Hasina is committed to do the same.

The public representatives should put their level best efforts for reflecting the hopes and aspirations of grassroots people, the Commissioner added.