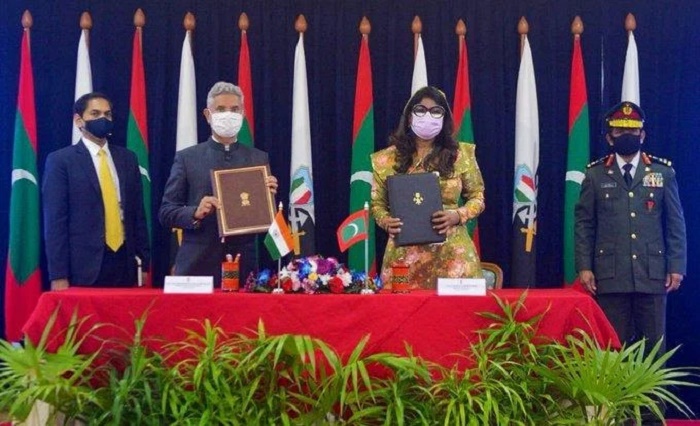 A $50 million line of credit for the Maldives National Defence Force (MNDF) to buy Indian military equipment, Indian assistance for a coast guard harbour close to the capital Malé in Sifvaru, Uthuru Thila Falhu (UTF) in Maé Atoll and the handover of a second batch of 100,000 doses of Covid vaccine were among the highlights of External Affairs Minister S Jaishankar’s second visit to the Maldives. The line of credit will be used by the Maldivian Defence Force to buy equipment it deems necessary. As for the Coast Guard agreement, India will develop, support and maintain a harbour and dockyard comprising berthing facilities for ships, repair and maintenance unit, training facilities for personnel and accommodation. It’s expected to take three years and India is to provide maintenance aid for equipment at the dockyard for 15 years. Sources told Strat News: “Indian ships that visit for HADR (Humanitarian Assistance and Disaster Relief) and joint EEZ (Exclusive Economic Zone) surveillance will also be able to use the harbour for bunkering and servicing once it’s built.”

The agreement “will strengthen Maldivian Coast Guard capability and facilitate regional HADR efforts,” Jaishankar tweeted, while Defence Minister Mariya Didi described it as “another significant milestone in the time immemorial defence cooperation (that) has been a key element of the sisterly relationship between India and the Maldives.”

The MNDF has reiterated that no foreign military personnel will be stationed there but the Opposition coalition People’s National Conference (PNC) Vice President Mohamed Hussain Shareef told StratNews that the MNDF has not made a “succinct’ clarification” adding, “as a party we have always stood against the presence of foreign troops from any country, in any shape or form on our soil. We need a clarification on the remit of the UTF harbour and the presence, if any, that is proposed to have troops on an operational level. It’s not about India, we had also declined a SOFA (Status of Forces Agreement) proposal from America. We emphasise and espouse a policy of a tripartite arrangement for Indian Ocean security, which involves us, India and Sri Lanka but we do not welcome stationing of foreign troops or other external military exercises in our waters.”

Incidentally, members of the Opposition including former president Mohamad Waheed, in their meeting with Jaishankar, also raised the case of ex-President Abdulla Yameen Gayoom, who is in jail. Yameen presided over a period which saw relations with India go south and ties with China strengthen. Shareef told StratNews: “we requested politely for the same standard as when we were in power.” Pointing out that India had then “lodged concerns on strengthening democracy and sustaining the rule of law, he added, “we would expect the Indian authorities to have the same level of concern even now, when there quite clearly isn’t any separation of institutional powers.”

The two countries have agreed to convene a joint working group on de-radicalisation and countering terrorism and extremism. As part of continuing support for Maldives’ development, India’s Exim Bank is also extending a line of credit to build 2000 housing units in Hulhumalé. Jaishankar also kicked off agreements on road building in Addu, the second largest urban area in the archipelago.