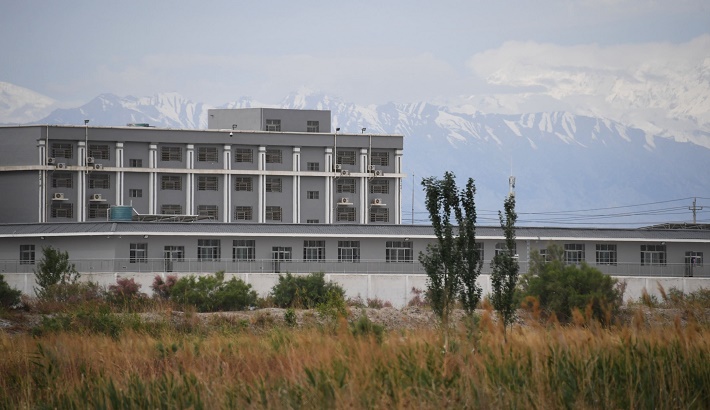 This file photo shows a facility believed to be a re-education camp where mostly Muslim ethnic minorities, like Uighurs, are detained in Xinjiang

A woman who claims to have been forced to teach Mandarin to classes of “loudly crying” men and women inside China’s Uighur detention camps has given a rare glimpse into what goes on behind their closed, locked and guarded doors.

Qelbinur Sidik, a teacher, said she was summoned to a meeting at the Saybagh District Bureau of Education in 2016 and told she would soon be working with “illiterates”. By 2017, she was routinely teaching Madarin to classes of “shackled” students inside two government-run camps.

Ms Sidik, an Uzbek, grew up in Xinjiang and spent 28 years teaching school children aged from six to 13.

In an interview with CNN on Friday, Ms Sidik said detainees arrived at the centres “fit, robust and bright-eyed” but quickly became sick and weak. She recalled regularly hearing screams from above her basement-level classroom which, when she asked, a male policeman confirmed to be the cries of tortured detainees.

“I witnessed horrific tragedy,” she said.

Ms Sidik also alleged that, inside one of the camps she worked at, a female police officer told her she was investigating reports of guards raping inmates. That same policewoman, according to Ms Sidik, said her male colleagues would get drunk and “tell each other how they raped and tortured girls”.

While none of these claims could be verified, due to China’s insistence no such abuse takes place in these so-called “vocational centres”, Ms Sidik’s version of events is similar to survivors who have spoken out about their experiences.

Tursunay Ziyawudun, speaking in the same CNN report earlier, said she had not committed any crime when she was seized in March 2018 and placed in a centre just outside the city of Ghulja, Xinjiang, where she remained for nine months.

Providing details of “multiple gang rapes” that took place, she said: “I heard a girl crying and screaming in another room. I saw about five or six men going into the room and I thought they were torturing her.

“But then I was gang raped. After that I realised what they also did to her.”

Ms Ziyawudun spoke to the broadcaster from inside the US, after she was rushed there for medical treatment in 2020. She returned to Kazahkstan in September 2019 under strict orders, by the Chinese authorities, not to talk about about her time at the camp, she said.

Doctors removed her uterus, with medical records seen by CNN showing she was diagnosed with a pelvic abscess and vaginal bleeding, as well as tuberculosis. Ms Ziyawudun said she blamed her treatment in the camp for her surgeries.

The Chinese government has continuously rejected allegations of genocide against Uighurs; in a statement to CNN it said “there is no so-called ‘systematic sexual assault and abuse against women’ in Xinjiang”.