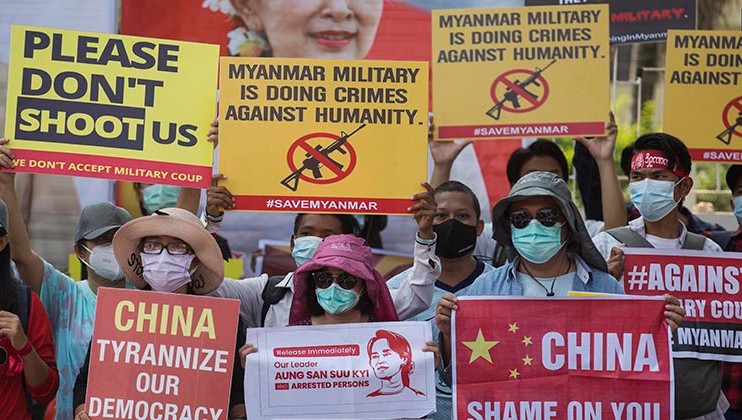 Beijing mouthpiece Global Times warned Western countries and other US allies in the region, including Washington’s “Quad” partners India, Australia and Japan, not to treat Myanmar as their “pawn” in a geopolitical rivalry, saying it would not do the country good, but risked dragging it further down into the abyss.

The paper said that “some hostile forces—both in and outside of Myanmar—are deliberately making use of this opportunity to spread rumors against China and stoke hatred to distance Myanmar from China, Myanmar’s largest trading partner and close neighbor.”

There have been daily protests in front of the Chinese Embassy in Yangon since the military staged a coup and overthrew the elected government in Myanmar.

Chen Hai, China’s ambassador to Myanmar, said earlier that the current situation in the country is “absolutely not what China wants to see,” amid growing anger toward Beijing among Myanmar people due to its perceived support for the military regime.

China has described the Myanmar military’s takeover—internationally condemned as a coup—as a “major cabinet reshuffle” and along with Russia blocked a recent effort by the UN Security Council to condemn the coup.

Responding to accusations that China is sending technicians to help the military build an internet firewall, Chen said that “these are completely nonsense and even ridiculous accusations.”

Chinese aircraft arriving in Yangon are making routine cargo flights carrying seafood and other export goods, he said, referring to rumors on social media that China has been flying in IT experts tasked with building the firewall for the military regime.

Last week, a Myanmar military spokesperson rejected the accusation that it was accepting help from China, claiming the military has enough experts of its own should it decide to build an internet firewall.

Global Times said Western forces are making use of the current sentiment in Myanmar to spread rumors through Hong Kong secessionists and local NGOs, while inside Myanmar, misunderstandings among some people toward China are being manipulated by radical groups.

Crowds of protesters have gathered daily in front of the Chinese, Russian and US embassies. This week, several dozen young people held a protest in front of the Singapore Embassy. Singapore Foreign Minister Vivian Balakrishnan said the bloc can play a “discreet, constructive role in facilitating a return to normalcy and stability in Myanmar, but he also reiterated ASEAN’s non-interference policy.

In front of the Chinese Embassy, one placard held up by a protester read: “China!!! Please support Myanmar people but not junta”. In front of the US Embassy, protesters held up signs calling for intervention: “We need the US army.”

Many placards appear well made and carry well-written messages in English.

Global Times cited several Chinese scholars as saying that civil society groups in Myanmar accepted funding and training from the West and said, “It is not a secret.”

US foundations provide money to Myanmar domestic organizations – “maybe $100,000 or $200,000 each time,” said a scholar from Myanmar who preferred to remain anonymous, Global Times reported. Two weeks ago in the Global Times a Chinese scholar said the US may also adopt a “color revolution” approach to Myanmar, but the scholar did not elaborate further.

In retrospect, a pattern can be seen whereby Chinese companies investing in Myanmar have bought local media and advertising space to promote Chinese propaganda. China also provides arms and logistic support to ethnic rebel forces along the China-Myanmar border.

China is the second-largest investor in the country after Singapore.