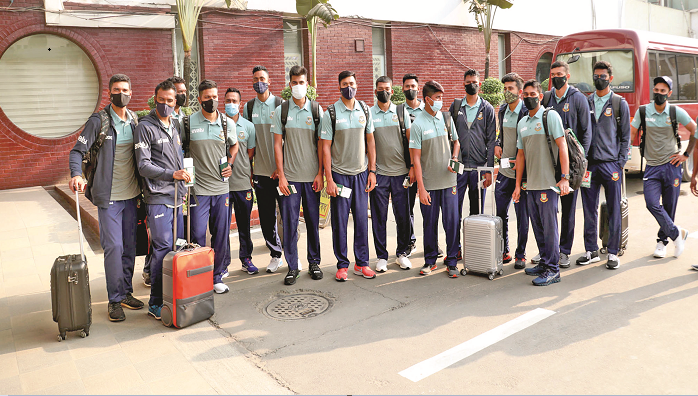 Bangladesh ODI skipper Tamim Iqbal was optimistic to break the New Zealand jinx this time around as Tigers left Dhaka on Tuesday for New Zealand for a six-week tour, which starts with a long quarantine, followed by three ODIs and three T20Is.

Bangladesh have earlier lost all their 13 ODIs and four Twenty20 internationals against the Kiwis in New Zealand.

This will be also Bangladesh’s first tour in New Zealand following the Christchurch terror attack on March 15, 2019, where the team narrowly escaped the gunman who targeted two mosques in the city and killed 51 people.

“We all know New Zealand's condition is difficult for us but nothing is impossible,” Tamim told reporters at the Hazrat Shahjalal International Airport.

“We will try to achieve something that we have not achieved so far in New Zealand. We are confident about it,” he added.

The series was earlier pushed back by a week due to the ongoing challenges in the Covid-19 environment.

The three ODIs will now be held on March 20, 23 and 26 in Dunedin, Christchurch and Wellington respectively while the three T20Is will take place on March 28, 30 and April 1 in Hamilton, Napier and Auckland respectively.

Bangladesh all-rounder Soumya Sarkar said that they are taking inspiration from their last home ODI series win against West Indies.

“Certainly something good will happen and we have taken mental and skill preparation for it and we are hopeful that everyone will do well for us,” said Soumya.

“We have done well against West Indies in one-day series and we hope that it will be the case in the ODI series,” he added.

Bangladesh pace bowling all-rounder Mohammad Saifuddin said that he is eyeing to cement his place in the playing XI adding that they have taken enough preparation for the series.

“I don’t think it’s quite big of an opportunity as everything depends on the team combination. But if I get an opportunity to play, then I’ll give my best,” said Saifuddin.

“We will have two weeks to prepare and will try to get adjusted with the condition with the help of coaching staff members,” he added.

BCB director Jalal Yunus, who is accompanying the team in the series, informed that Tigers will play a practice game ahead of the series adding that they are worried about the quarantine rather than anything else as they will have to stay for 14 days with seven-day hotel quarantine.

“We care less about the condition, as we have to get in the field, no matter how the condition is. We are more worried about the quarantine process, as they (players) have to stay in the hotel room for seven straight days, which is a big challenge for us. Though we will have team doctors with us and they will check-up the cricketers daily,” said Jalal.

“The physio will be there as the chief physician Debashish Chowdhury, who will mostly boost the confidence of the cricketers as we feel that they would go through constant mental pressure throughout the series.

“After seven days of quarantine, we will gather our players to play a practice match against a local team, formed with the local players of Queenstown,” he added.