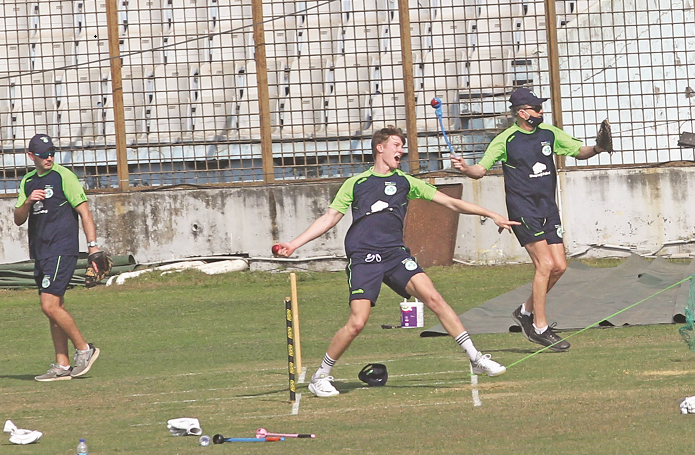 Ireland Wolves began their preparation ahead of their upcoming series against Bangladesh emerging team at the Zahur Ahmed Chowdhury Stadium in Chattogram on Tuesday.

The visitors arrived on February 18 to play one four-dayer, five one-dayers and two Twenty20s.

Wolves completed their three-day quarantine on February 21 in Chattogram’s Raddison Blu and didn’t practice on the following day.

On their opening day at training, the visitors passed a busy day with a fielding session followed by an extensive net session.

The series will start with the lone four-day match at the Zahur Ahmed Chowdhury Stadium on February 26 - March 1.

Wolves made some last-minute adjustments after their left-arm spinner George Dockrell chose not to accompany the team alongside head coach Pete Johnston.

All-rounder Ruhan Pretorius joined the Ireland Wolves squad to replace Dockrell and completes the 16-man squad which will be led by Harry Tector across all formats on the tour.

Graham Ford and Stuart Barnes are now overseeing the whole tour from a coaching perspective.