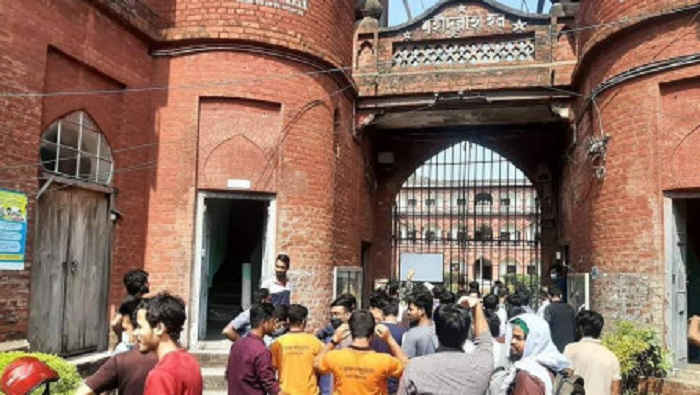 Dhaka University (DU) students on Monday stormed Dr Muhammad Shahidullah Hall, which had been shut down because of the pandemic.

More than 100 students entered the hall premises amid protests by public university students across the country to reopen dormitories.

The protesting students broke the lock on the door of Shahidullah Hall and entered it around 12pm.

The on-duty security guards did not stop them from entering the hall. And Provost Professor Syed Humayun Akhter was not present at that time.

However, Humayun Akhter said: "Students only came to the hall to collect their personal belongings from their rooms, not to start living here. The university will decide on hall opening."

DU Vice-Chancellor Dr Md Aktaruzzaman said, "We are in a meeting over the issue and looking into it."

However, the students have long demanded the reopening of the halls, saying, "The university is running all activities but keeping the dormitories shut."

Preferring anonymity, a protesting student said they staged the demonstration to give the authorities a message that students can get into their dormitory whenever they want.

Also, the protesting students gave a 72-hour ultimatum, demanding the reopening of dormitories by March 1. They threatened to go for tougher movement, else.

DU Proctor Professor AKM Golam Rabbani said, "We will sit with the students to find out a solution."

Earlier, at 11:30am, some students of the university gathered in front of Curzon Hall premises and headed towards Shahidullah Hall. They demanded the reopening of dormitories and campus immediately.

The universities suspended academic activities and vacated halls in March last year following the onset of Covid-19 in Bangladesh.

School and colleges also remained closed from the same month. Classes and exams were taken online during the pandemic.