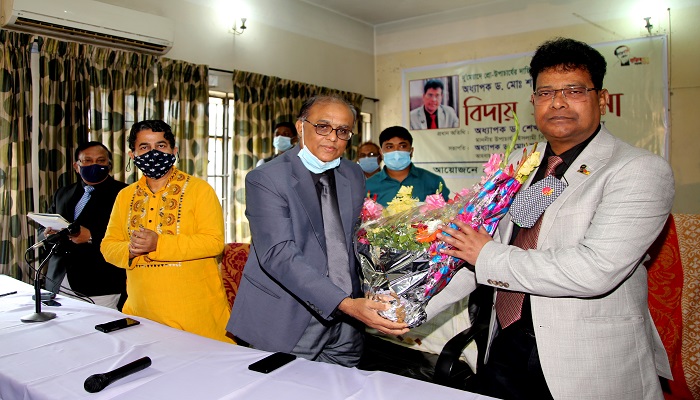 Eminent educationist Dr. Rahman record successfully ended up his consecutive tenures as Pro VC in the administrative history of this highest seat of learning and research since its establishment.

Today was the last day of Dr. Rahman as the Pro-ViceChancellor of the University. On the eve of his tenure completion, the authority of Islamic University (IU) accorded a pomp reception to the Pro-Vice Chancellor at the conference hall in the administrative building.

Colleagues warmly rendered a memorable farewell to the Pro-Vice-Chancellor in a chime, which is remarkable.

The IU VC warmly admired his outgoing running mate wholeheartedly while he recalls many of Dr. Rahman’s unforgettable skills in administrative management since he took office.

The IU authority presented the outgoing Pro-VC a crest of honour with a sash.

In the farewell reception IU VC Said, “Professor Rahman is a man of personality. He is the most efficient academic and administrator who will serve not only this university but also the nation by his merits.”

In his speech, IU outgoing Pro-VC Professor Dr M. Shahinoor Rahman said that love of all teachers, officers and staff of this university has tremendously made my tenures successful.”

Dr Rahman Said that he loves students and colleagues who always support him.

“I will be with the student all the time as I was before in the classroom,” said he.

Dr. Rahman started his first term on 20 February 2013 and following the tenure he was again appointed in the same charge on February 23, 2017.