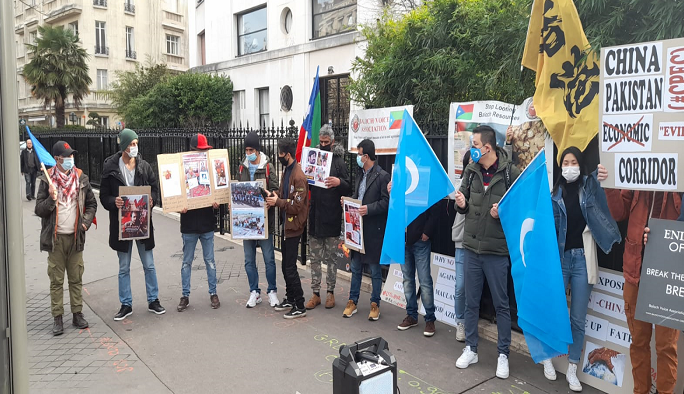 As Financial Action Task Force (FATF) prepares to decide Pakistan’s fate, exiled dissidents from Pakistan, Tibet and Hong Kong gathered outside the headquarters of the financial watchdog in Paris on Saturday urging it to blacklist Pakistan and deliver on its mandate of stopping terror financing and sponsoring from Pakistan.

The members of the FATF are meeting from February 22-25 to review Pakistan’s status, which is already on the grey list of the global anti-money laundering and terror financing watchdog.

While Pakistan has been repeatedly adopting the tactic of showcasing taking action against terror financing by placing senior terror group leaders under arrest ahead of FATF plenaries, these UN listed entities, like the Lashkar-e-Taiba (now rebranded as Jamat ud Dawa -JuD) and Jaish e Mohammad (JeM) continue to function freely in the country including collecting funds.

Taha Siddiqui, exiled Pakistani journalist and organiser of the protest said, “As the FATF will be meeting to discuss and review the case of Pakistan, the idea of this protest is to gather dissidents from Balochistan, from Pashtun dominated areas, Tibet, Hong Kong and Uyghur to gather together and build a united front to remind the people and Pakistan-China nexus and to remind the FATF and European government that Pakistan should be held accountable its continued support to terror groups and for its continued support to terror financing”.

He added, “The FATF should not come under the pressure of China and should not be blackmailed by China”.

China, a close strategic partner of Pakistan, has been defending and often covering up for Pakistan’s links to terror groups. It has stood by Pakistan in the UNSC and other multilateral forums on this issue.

For instance, China, for a decade, blocked the listing of Jaish-e-Mohammed (JeM) chief Masood Azhar as a global terrorist under the United Nations sanctions regime. Though Beijing repeatedly asserts that it is against terrorism, but it justified its UNSC vote against putting Azhar on the list by saying there wasn’t enough evidence against Azhar and citing “procedural problems”.

Uyghur dissident Adil Kassim said, “China and Pakistan have economic friendship and they used terrorism to kill our people, the Muslims in East Turkistan (Xinjiang). Uyghurs are not terrorists, the real terrorist is the China”.
Kenneth Yeung, a dissident from Hong Kong said, “There is always a cooperation between China and Pakistan. China is actually using the Pakistani government to borrow money and also to set up its military base to expand Chinese imperialism. China is planning to finish the CPEC project. If Pakistan is removed from the grey list, they will further silence the Uyghur community on the one hand and the other hand, encourage Chinese colonialism in Asia. We urge FATF to keep Pakistan in the grey list to stop colonialism of China”.

The protest was planned and organized by The Dissident Club which has brought together the Pakistani and Chinese dissidents for the first time in France.

Post the protest, the participants met for a conference at The Dissident Club and vowed to continue their peaceful struggle through a joint action forum to continue to raise awareness about the Pakistan-China nexus in France and in Europe and remind the West of its commitments of eradicating all kinds of terrorism and ensuring human rights globally.

Dr Naseem Baloch of Baloch National Movement said, “the existing nexus between China and Pakistan is disastrous for Balochistan. The global powers need to review the One Belt One Road initiative and see its destruction. A massive military operation is ongoing in Balochistan in the areas where CPEC project is passing through. Pakistan fuels terrorism as when its economic condition is good as FATF should curb Pakistan’s trade deals with European Union.”

Munir Mengal, President of Baloch Voice Association said, “We have gathered here with a plea to FATF to curb on religious terrorist organisations which are threatening the Baloch. They want to occupy our land and destroy the identity of the Baloch. No action has been taken by FATF against Lashkar-e-Taiba who openly threatens the people. It’s time for FATF to put Pakistan on the blacklist for promoting religious terrorism”.

Fazal-ur-Rehman Faridi of Pashtun Tahafuz Movement said, “China Pakistan nexus is evident to the world now. They are cooperating with each other in terrorist training, terrorist financing as has been mentioned by different dissidents. It’s very important for the international community to look at the case of Danial Pearl, the terrorist who murdered him, has recently been released by Sindh High Court and the human rights activists are languishing in jails.”