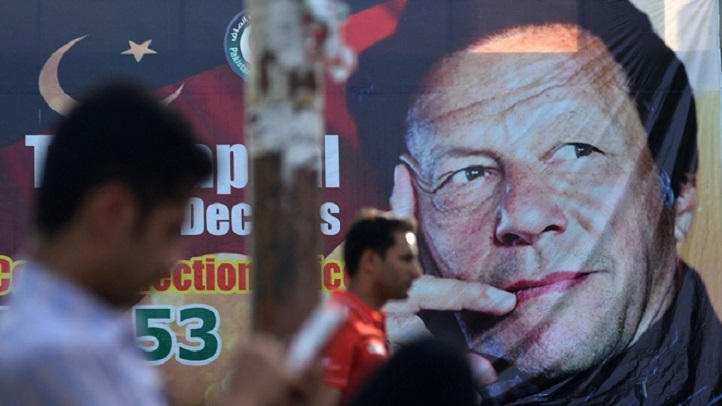 Pakistani men sit near a poster of cricketer-turned politician Imran Khan. His party has failed to deliver on its devolution promises. Photo: Aamir Qureshi/AFP

Reforms in Pakistan aimed at devolving more autonomy to local communities are in a shambles as provisional and central governments fight over power and resources, a conflict at the core of the nation’s uneven development and wealth divide.

More than a decade after the 18th constitutional amendment curbed the power of the presidency, Pakistani provinces are still struggling to consolidate its democratizing promise. That has been most evident in political parties’ moves to block yet to be held local-level elections.

The Pakistan Tehreek-i-Insaaf (PTI)-led central government, like its predecessors, has sought to wrest back power and resources transferred to the provinces in 2009 and 2010. From Islamabad’s perspective, the transfer of power has left the center politically weak and financially troubled.

Backed by a cohort of retired personnel from the civil and military establishment, Prime Minister Imran Khan’s attacks on the 18th amendment have frozen decentralization at a provincial level.

As one member of the Punjab provincial assembly from the opposition put it, “For the largely powerless and dysfunctional local bodies, provincial capitals rather than Islamabad are the new centers of power, unwilling and unable to devolve power to improve governance and bring the system within the reach of the common man.”

But the new centers of power are fragile, with their resources consistently under attack.

In December 2019, for instance, Pakistan’s four provinces jointly provided 202 billion rupees (US$1.27 billion) to the center during the first quarter of that fiscal year to help meet International Monetary Fund pay back commitments.

The cash transfer was far from willing and was largely made possible by the presence of PTI governments in three of the provinces. It also showed that the provinces were unable to disburse more than a quarter of the funds available for the welfare of their citizens.

Sindh province, where Pakistan’s People’s Party is in power, provided the least amount to the center. It returned 35.5 billion rupees, less than 18% of its total resources. Punjab sent a cash surplus of 75.4 billion rupees, or almost 21% of its collected 366 billion rupees.

Khyber Pakhtunkhwa province, which has been ravaged by Taliban extremism, could not spend almost 54 billion rupees, or about 38% of its available resources of 141 billion.

Balochistan, Pakistan’s most impoverished province and long troubled by a separatist insurgency fighting a so-called “fifth war of independence”,  returned about 37.3 billion rupees to the center, representing 43.4% of its 86 billion rupees in revenues.

While the PTI-led central government was able to extract financial resources from the provinces in the name of IMF commitments, one key reason for its financially weak position was over-spending on defense and its inability to expand the national tax base.

In Pakistan, provincial resources are managed by a body known as the National Finance Commission. One multi-year allocation to the provinces was signed and agreed in 2009 with the advent of the 18th amendment.

At the time, the federal government was asked to increase its revenue collection from 8.8% to 13.9% of GDP and cut its expenses from 14.1% to 12.5% by 2014-15. None of this happened, however. Instead, when the next commission was constituted in 2020, it was revealed that the central government was trying to extract not devolve more resources from the provinces.

The center is now trying to regain control of at least 1% of GDP (about 450 billion rupees based on the current year’s budget estimates) from the provinces that it surrendered in 2009.  This proposal, which is unlikely to be approved by the provinces, would mean the center’s share of pooled taxes would go up to about 50% from 42.5%.

Such a change would also violate constitutional provisions which guarantee that the provinces’ share of national resources cannot be less than 57.5% of GDP. This provision was added through the 18th amendment, which explains why the PTI government is eager to “review” the constitution to meet its fiscal needs.

The provinces’ share of resources has already fallen drastically by some 3.5% of GDP in the current fiscal year.

The reduction, due largely to the central government’s inability to meet its revenue collection targets, is on top of the federal government’s demand from the provinces to forego at least 7% of net divisible tax pool revenues to finance the security of the multi-billion-dollar China Pakistan Economic Corridor (CPEC).

One way for provinces to consolidate their autonomy and deploy their resources would have been to transfer them to the local level. But local government laws do not allow for the transfer of sufficient power and resources to the districts and lower-level authorities.

This is further compounded by the constant resource struggle between the center and the provinces affecting the latter’s ability, despite repeated interventions by the Supreme Court, to introduce and implement legislation that could transform local government.

The whole scenario has undercut the PTI’s ideology of political change and transformation. In an interview a few months after assuming power, Prime Minister Khan emphatically said, “our government’s number one priority is to hand over governance to the people”.

Indeed, chapter two of the PTI’s 2018 manifesto says, “We will transform Pakistan by devolving power and decision-making to the people through an empowered local government.”

Along with federal government, PTI currently heads two provincial governments: Punjab and Khyber Pakhtunkhwa. The Balochistan Awami Party (BAP) in Balochistan is also an ally of the PTI government at the center.

Yet the local government systems in all three provinces are in disarray. While Sindh has been able to develop a relatively and marginally better system of local government, it is now locked in a struggle against the center’s grasp for provincial resources and powers.

Even after the so-called transition to electoral democracy after 2008 when Pervaiz Musharraf was forced out of power, grassroots democracy is still captive to central and provincial political elites who espouse democratization while actually seeking re-centralization of power.