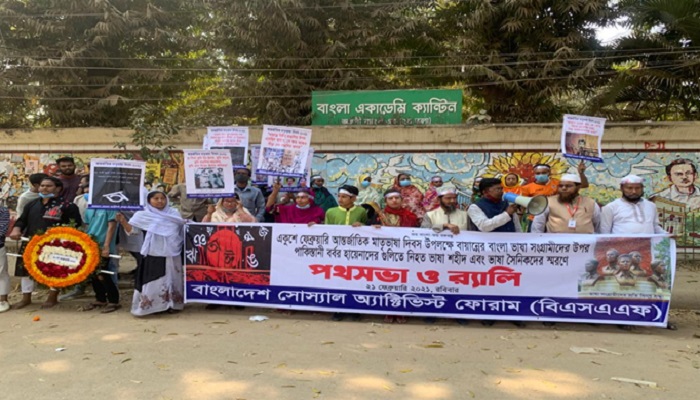 On the occasion of International Mother Language Day, different socio-cultural organisations and civil society platforms took part in processions-cum human-chain programmes, bicycle-rally and Seminars in Dhaka and other Divisional towns in Bangladesh.

While paying homage to the brave-hearts who lost their lives, speakers recalled with horror the role of Pakistan occupation forces to suppress the movement and brutal crackdown on innocent citizens.

Some of the prominent programmes are as mentioned below:

Bangladesh Social Activists Forum (BSAF), a prominent NGO having roots in the nationalist movement of the country, held memorial meetings and processions in various parts of the country.

In Dhaka, volunteers of BSAF offered floral tribute at Dhaka Central Shaheed Minar followed by a rally of over one hundred people which paraded Dhaka University, National Museum and ended at Dhaka Press Club.  Freedom fighters, intellectuals and scholars participated in the function.

In Khulna, a rally of over hundred people including twenty motor bikes was held from Shaheed Hadith Park and culminated at Gallamari Shaheed Budhijeevi Memorial. Similar rallies and memorial meetings were held in Rajshahi, Benepole and Patuakhali.

During the rally, posters condemning Pakistan for its brutal attempt to suppress the Bengali language movement in 1952 were displayed.

In their address, speakers pledged not to forget the atrocities committed by Pakistan on hapless Bengali people.

Approximately one hundred and fifty people including prominent individuals and liberation war veterans participated in the function.

The speakers, in their address remembered the evil intention of Pakistan to snatch Bangla language and culture through their ‘Urdu only’ policy which freedom loving Bengali population vehemently opposed.

The speakers remembered that Pakistan’s evil designs to control Bangladesh were unabated and still continuing in various forms.

They pledged to resist the nefarious designs of Pakistan and continue to fight to protect the much fought freedom and liberation of the country.

Around one hundred and thirty five people took part in the rally led by Taufiq Ahmed Tasfir, President of the organisation. The rally started from Nikunja, passed through Road No. 71 where Pakistan High Commission is located and terminated at Gulshan Avenue.

Speaking during the programme, speakers stated that innocent Bangladeshi people were victimised by the Pak forces who wanted to suppress the freedom of speech of Bengali people.

They urged the government to sever all kinds of bilateral relations with Pakistan, the killer of 30 lakh Bangladeshis.

Participants were holding placards with slogans such as ‘Pakistan wanted to kill Bengali’s freedom of speech’, ‘we will not forgive Pakistan who emptied the lap of mother for speaking in mother language’, ‘ those who did not accept our Bangla language cannot be our friends.’