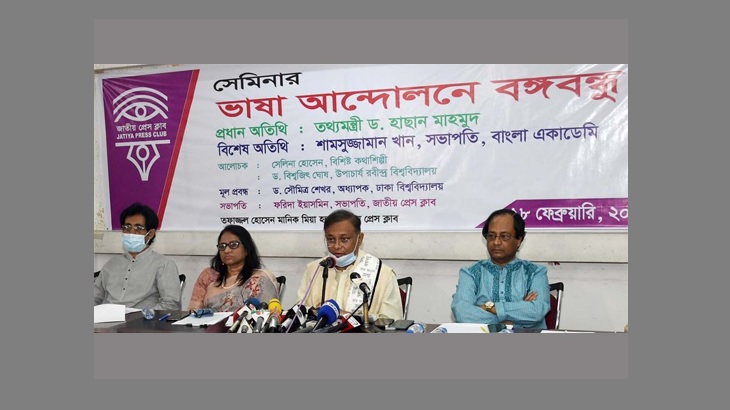 “Bangabandhu’s contribution to the 1952 Language Movement remains everlasting…the then young students’ leader, Sheikh Hasina, presented the demand for making Bangla as the state language,” he said.

Hasan, also joint general secretary of Awami League, was talking to reporters after paying homage, along with AL leaders and workers, to the language movement martyrs at the Central Shaheed Minar here in the morning, marking Amar Ekushey and the International Mother Language Day.

Earlier, at the midnight, an AL delegation led by its General Secretary and Road Transport and Bridges Minister Obaidul Quader placed wreaths at the Shaheed Minar on behalf of AL President and Prime Minister Sheikh Hasina.

Hasan said the country’s independence and the movement of self-governance were achieved following the path of the Language Movement with the blood of martyrs.

Noting that the government is working for introduction of Bangla at all levels, he said Bangla is the sixth language of the world in terms of Bangla-speaking population.

“Our government is moving forward with a goal of establishing Bangla as the official language of the United Nations,” the AL joint general secretary said.

Before placing a wreath at the central Shaheed Minar, Hasan accompanying with the AL leaders visited Azimpur graveyard and paid homage at the graves of language movement martyrs Abul Barkat, Abdul Jabbar and Shafiur.

After placing wreaths and offering prayers in silence, they marched towards the Shaheed Minar.

Earlier, at a rally in the month of the Language Movement, Hasan said Father of the Nation Bangabandhu Sheikh Mujibur Rahman arranged a protest rally in Dhaka in 1948 immediate after Mohammad Ali Jinnah declared that “Urdu would be the only state language of Pakistan”.

“He (Bangabandhu) also presided over the meeting and he was arrested for this movement. In the jail, he continued the movement for language through hunger strike,” he said.

“We have a responsibility to history to highlight the remarkable contribution of Father of the Nation to the great Language Movement,” the information minister said.