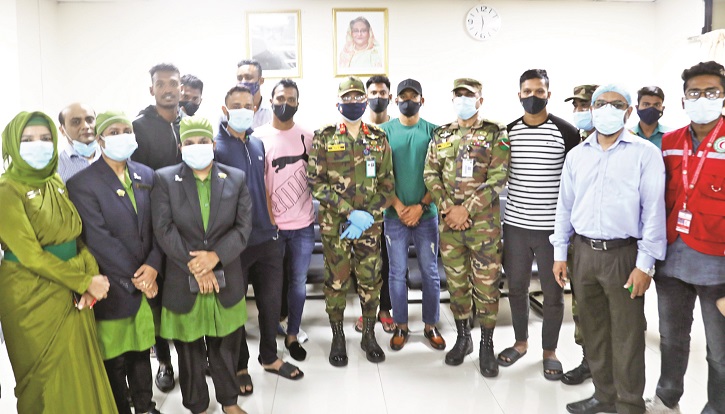 New Zealand-bound Bangladesh cricketers pose for a photo after receiving COVID-19 vaccine in Kurmitola General Hospital in the capital on Saturday. –BCB photo

Five cricketers - including Mushfiqur Rahim and Mahmudullah will receive Covid-19 vaccination after coming from the New Zealand tour, Bangladesh Cricket Board officials informed on Saturday.

Tamim Iqbal and Russell Domingo were among several Bangladesh cricketers and support staff, who received Covid-19 vaccine in Dhaka on Thursday ahead of the team's departure for New Zealand next week to take part in a limited-over international series.

Soumya Sarkar was the first to be vaccinated at the Kurmitola General Hospital followed by Tamim, Mehidy Hasan, Naim Sheikh and Taskin Ahmed.

A special arrangement was made for the overseas coaches since they don't have the Bangladeshi national ID which is mandatory to be eligible for the vaccine and they also received the vaccine after the first batch of players on the same day.

The second round of vaccination program was held at Kurmitola General Hospital on Saturday where Al-Amin Hossain, Mohammad Mithun, Rubel Hossain, Mustafizur Rahman, Mohammad Saifuddin and many other NZ-bound players received Covid-19 vaccine.

However, five cricketers did not turn up including senior duo Mushfiqur and Mahmudullah raising the question of whether they will be vaccinated or not.

“They are not reluctant to take vaccines. It is just that they have requested that they want to be vaccinated after returning from the tour,” BCB physician Manzur Hossain Chowdhury told reporters.

More than two million Bangladeshis have taken the vaccine till Saturday since the government rolled it out earlier this month.