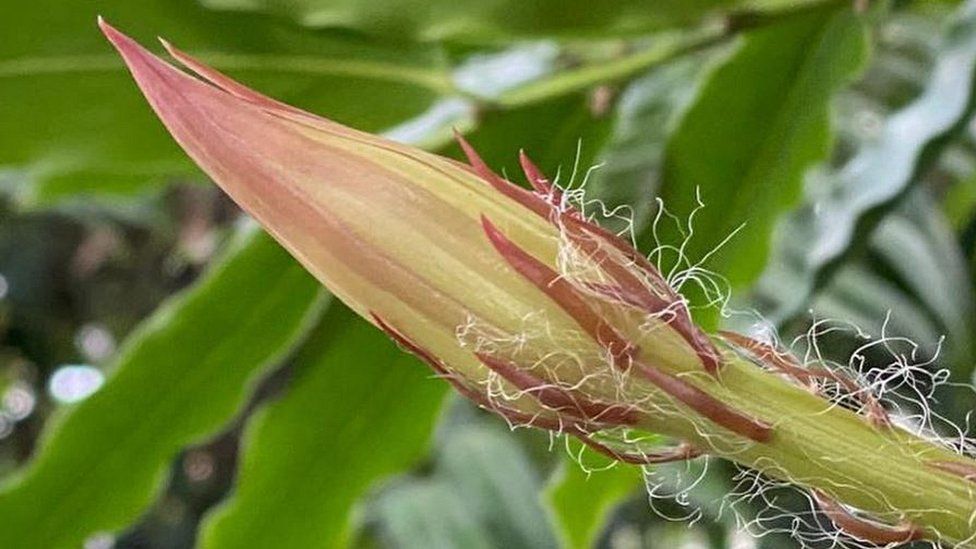 After 11 days of being watched, the camera-shy flower was getting closer to blooming, the garden said.

The long wait for a rare Amazonian cactus to bloom has attracted interest from around the world.

Cambridge University Botanic Garden, where it is growing, believed the moonflower Selenicereus wittii would be the first to flower in the UK.

Thousands of people have viewed a webcam which was trained on the plant about 11 days ago, but it has still not bloomed.

Anticipation is high as it will flower at night - just once - for 12 hours.

The specimen was acquired from Bonn Botanic Garden in Germany in 2015 and was attached to a water chestnut tree, where it climbed 12ft (3.5m) above the ground in a glasshouse before putting out its first bud.

Glasshouse supervisor Alex Summers, who planted it, sparked global interest when he said: "It's very rare to have this plant in our collection and we believe this is the first time the moonflower has flowered in the UK."

The webcam has been viewed about 120,000 times since it went live.

"People are watching from all over the world which is lovely - UK, USA, Canada, New Zealand, all over Europe and as far as the Philippines," a spokeswoman said.

A live webcam was trained on the flower bud on 9 February, waiting for it to open

However, the global coverage also led to a number of people questioning the "rarity" of the Cambridge specimen and sending their own moonflower photographs to staff.

"People have been getting a bit confused about the name 'moonflower'," the spokeswoman said, explaining that "lots of plants are given the common name moonflower".

It prompted glasshouse expert Mr Summers to publish an article on the website titled "Is my moonflower the same as your moonflower?".

"It is likely that most people may have Epiphyllum oxypetalum - a common epiphytic cactus species in cultivation," he wrote.

"This is not in the same genus as the moonflower we have growing here.

"According to the Botanic Gardens Conservation International (BGCI), the species that we are growing can be found only in 13 botanic gardens globally.

"To put this in to perspective, this makes it even rarer in cultivation than the Titan arum (otherwise known as the corpse flower) which bloomed at Cambridge University Botanic Garden in 2017."

The garden's director, Prof Beverley Glover, said they had "lost count" of the number of people who had phoned and sent photos of their own - different - moonflowers, many of which have been posted on the website.

"The response, though, is absolutely fantastic," she said.

"One of our primary roles is getting people engaged with plants and to have so many people interested, from around the world, is just thrilling."