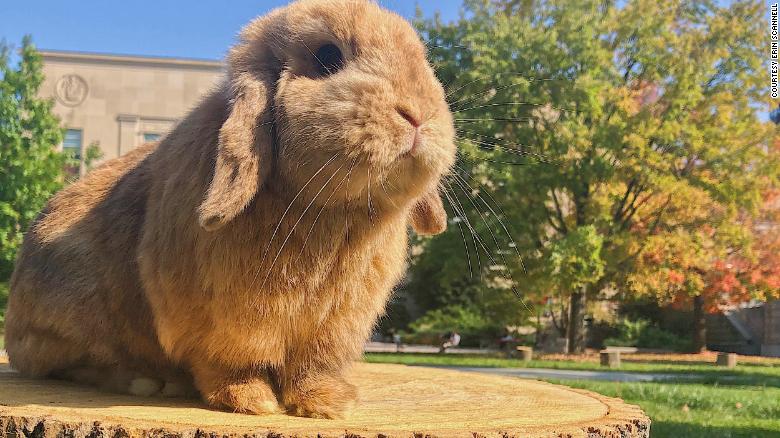 It's National Love Your Pet Day on Saturday, and a couple animal buddies in particular are earning their snuggles. Rabbits Finn and Budgie are more than just lovable companions — they provide their owners with emotional support.

"So many people think of cats and dogs when they think about emotional support from an animal in their life. And I think many people would say that they get all those same benefits in their relationship with their rabbit," said Anne Martin, executive director of the House Rabbit Society, an international nonprofit animal welfare organization headquartered in Richmond, California, that helps bunnies find homes and live their best lives.

While rabbits can make great emotional support, they shouldn't be brought into the home as a pet for only this purpose, Martin said.

Just like cats and dogs, she said, rabbits have a wide range of personalities. Some enjoy their independence, and others might be more needy or affectionate.

"I would just want people to make sure that they would want the rabbit even if they felt like they weren't medication," she said.

Finn has celebrated all of the holidays and seasons on campus at Cornell University, while most students were away due to the pandemic.

Finn, who rose to college celebrity status over the past year, and Budgie, who has helped one woman live through Parkinson's for more than a decade, have supported their owners through some of life's biggest challenges.

Finn the big red bun
Erin Scannell said Finn, her 2-year-old Holland Lop, was her perfect match.
"He's quite the character actually," she said. "He's also probably the most loving animal I've ever owned. ... He's just obsessed with me."

Often his curiosity will get Finn into predicaments — like jumping into a box that is too big for him to get out of. When Scannell comes home, Finn loves running up to the door to "chin" her — which is the term describing the bump bunnies will give to something, or someone, they want to "claim."

Finn has been an integral part of Scannell's mental health journey, which began her freshman year of high school, when she was first diagnosed with major depressive disorder.

"I was super shy, like extremely shy, I didn't talk to anyone," she said. "And it was hard — really, really hard for a while."

Now, Scannell has been in therapy for at least five years, and during that time she was able to work toward a point where she was able to open up more, especially during her first year at the University of Delaware.

Then she was given the opportunity to transfer to Cornell University in upstate New York. As an animal science student, she was thrilled to participate in its program, which has ranked in the top three in the nation.

"It's a program that I couldn't say no to, and it was always my dream," she said. "And it was the hardest thing I've ever done. I thought it was going to be an easy transition, but the classwork here was insane."

The transition brought on some intense symptoms of anxiety for Scannell, including panic attacks during the night.

Her therapist offered a possible solution: Adopt a furry friend. Scannell got Finn in February 2019 and her doctor helped her certify him as an emotional support animal — that allows him to live with her in places he might not otherwise be welcome.

"Finn was the perfect reason, I remember her saying, for me to always come home at night and not spend all day at the library, working myself crazy," she said. "I was able to go home because there was someone who needed me at home."

Finn hasn't only helped her mental health; Scannell said he has become a support for the whole community through his Instagram page. At nearly 7,000 followers, his handle, @BigRedBun, was a play on a slogan for Cornell's sports teams.

Finn's social media has created a way for students to connect with the campus and see it through his perspective while they are away and unable to socialize in person due to the pandemic, Scannell said.

And by starring in her Valentine's Day cards, Finn helped Scannell raise $2,252 for a good cause. She sold 500 of the bunny-grams to students and their parents at the university. The funds are going to Cornell EARS, the campus peer-counseling program — a community and mission Scannell said Finn has supported since day one.