Mars landing: Photo shows Perseverance about to touch down 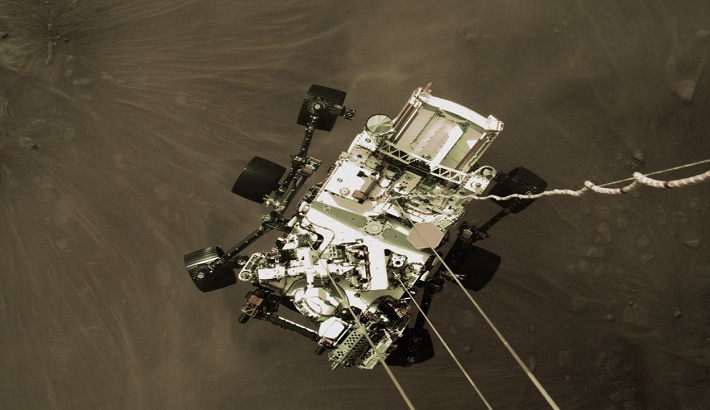 The American space agency has released an astonishing image sent back from Mars by its Perseverance rover.

It shows the robot heading down to the ground on Thursday to make its landing. It was acquired by the rocket cradle that placed the vehicle on the surface.

Perseverance has a large amount of data in its memory banks which it is gradually offloading to Earth.

Among other pictures is a view from a satellite that captures the rover in the parachute phase of its descent.

This also represents an immense technical achievement because the satellite - the Mars Reconnaissance Orbiter - was approximately 700km from Perseverance at the time and traveling at about 3km/s.

Nasa is promising more in the next few days.

This offering will include short movies shot during the Entry, Descent and Landing (EDL) sequence - with sound.

Perseverance has been put in a near-equatorial Martian crater known as Jezero where it will search for signs of past microbial life.