BhashaAndolan - A Precursor to the 1971 war of Liberation 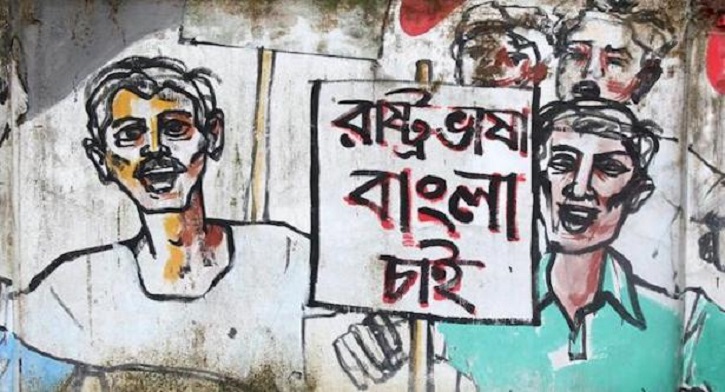 The first major conflict between erstwhile East and West Pakistan occurred over language and February 21 is a milestone in that struggle. This date is commemorated worldwide as International Mother Language Day, and draws its significance from the ‘BhashaAndolon’ or language movement in which the people of erstwhile East Pakistan were demanding equal status for the Bengali language. The BashaAndolan was the culmination of systematic negation and nullification of the ‘Bengali’ language the regional identity of Bengal.

Nearly 98% of the population, and virtually 100% of the urbanized, educated population, in East Pakistan comprised a single ethnic group of Bengalis, constituting about 55% of Pakistan’s overall population. Despite this the central government of Pakistan started the unilateral use of Urdu in moneyorder forms, postal stamps, currencies, coins, railway tickets and officialletterheads even without formally adopting Urdu as state language. This policy was unpopular in both sections of Pakistan, because it seemed that Urdu-speakers, an intellectual elite, and population minority, were implicitly declaring their culture as superior to all others. The decision by the government in West Pakistan to make Urdu the official language of Pakistan was vehemently opposed by the members of the ‘TamaddunMajlish’ which was organized by professors and students of Dhaka University under the leadership of Professor AbulKashem in September 1947, first ever to convene a literary meeting to discuss the issue of national language. Representing a unified platform of resistance against the Urdu single-language proposal, students and intellectuals of East Pakistan resisted and demanded that Bengali should also be made as one of the State languages and the medium of instruction in East Pakistan along with Urdu.The cultural domination of one ethnic group was deeply resented.

At the first session of the Constituent Assembly of Pakistan in  Karachi, the then capital of Pakistan, on February 23, 1948, DhirendranaDatta, a member from East Pakistan Congress Party, tabled an amendment motion to include Bengali as one of the languages of the Constituent Assembly along with Urdu and English. He pointed out that “out of 69 million population of Pakistan, 44 million were from East Pakistan with Bangla as their mother tongue.” The central leaders, including Liaquat Ali Khan, Prime Minister of Pakistan and KhawajwNazimuddin, Chief Minister of East Bengal, Ghaznafar Ali Khan and others opposed the motion in strong words, stressing on one nation, one state and one language namely Urdu. In a famous speech, given at a special Dhaka University convocation to honor him, on March 24, 1948 Muhammad Ali Jinnahsaid, “Let me make it very clear to you that the state language of Pakistan is going to be Urdu and no other language. Anyone who tries to mislead you is really the enemy of Pakistan.”

The preference for ‘Bangla’ by the majority in East Pakistan was ignored and their suggestion deemed unreasonable. Over the next several years Dhaka University became directly linked as the place of the BhashaAndolan, but the largely non-violent agitation of the students continued to be dismissed by West Pakistani leadership. Then in January 1952, the Constitution Assembly of Pakistan submitted its recommendation for making Urdu as the only state language, which sparked off a wave of anger in East Pakistan and protests erupted. In clear defiance of West Pakistani orders, students in Dhaka University held a mass protest against the proposal on February 21, 1952. Police fired on the crowd, resulting in the deaths of 26 people and hundreds injured. Riots and spontaneous demonstrations broke out across the city, and people swarmed toward the campus of Dhaka University. In the evening of the attacks, several students constructed a monument on the campus entrance to those killed in the protest. The police destroyed the monument almost immediately. At the national level, the effect of the ‘BhashaAndolan’ would take years to flesh out feed larger movement for independence. The collective discontent of the Bengalis of East Pakistan began to visulise a “nation” on the basis of common language and ethnicity, while they officially remained as part of the Pakistani state without distinctive political representation. The massacre of innocent students had a particular transformative effect. The concept of a distinct Bengali nation which was until now only “imagined”, was now firmly entrenched in the minds of East Pakistanis.

West Pakistan attempted to capitalize on the overwhelming Muslim identity of both halves of the country, giving the rationale as Urdu was linguistically related to Arabic and Persian it represented Islamic culture at its best. It even suggested “reforming” the Bengali, intensifying the language conflict. It also made amply clear that Pakistan’s national identity predicated on religious commonality was insufficient for unifying the country.The martyred students were glorified as those who died in defense of their mother tongue, Bengali. Ever since February 21 is commemorated as became known as Shaheed Dibash (Martyrs’ Day) in Bangladesh, and a memorial known as Shaheed Minar (Martyrs’ Column) has been constructed near Dhaka University. This massacre of students and intelligentsia should forever be served as a reminder to Bangladeshis of the oppression they faced under West Pakistani government.

Today Bangladesh observes Bhasha Shaheed Dibash (Language Martyrs Day) every year on ‘Ekushe February’ (21st ofFebruary). The song ‘Amar BhaierRokteRanganoEkushey’ (My Brother’s Blood Spattered on the 21st) is performed annually on February21 as part of countless performances across Bangladesh and within the Bengali Diaspora in memory of protesters killed on that fateful day. The song, said to have been written at the bedside of a student who had been shot by the police in a protest on Dhaka University, laments the death of those killed, and calls for action to continue the movement. It concludes with the lines “The souls of my martyred brothers still cry. But today everywhere the solemn strength of the people has begun to stir and we shall set February ablaze by the flame of our fierce anger. How can I ever forget the twenty-first of February?”

Processions, lighting of torches and cultural programmes mark Language Martyrs’ Day and homage is paid to those who laid down their lives for the cause of the Bengali language 69 years ago in Dhaka. It is hoped that for future generations Amar Ekushey (Immortal Shaheed Day) will continue to be a source of ceaseless inspiration. Beyond the issue of languageBhashaAndolan, highlighted the wider political and economic abuses of the West Pakistani government.