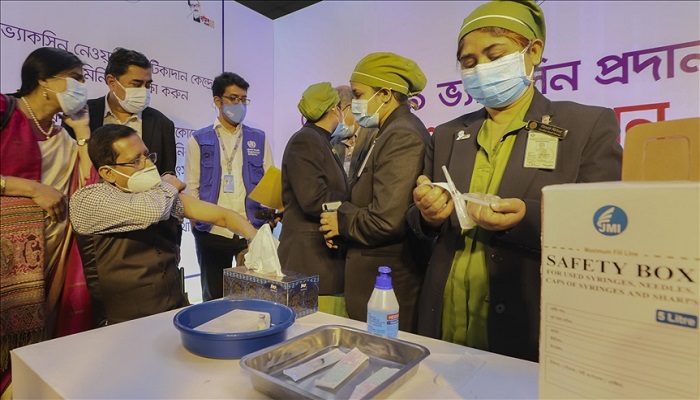 Bangladesh has successfully rolled out the Covid-19 vaccine though most of the countries, including developed ones, across the world are yet to procure the jab.

According to UN Secretary-General António Guterres, over 130 countries have not received a single dose of the vaccine.

However, Bangladesh has fared well in the vaccination as it has successfully been inoculating people against the deadly pathogen.

“We’re currently ranked 12th-13th in the world in the vaccination programme. If we calculate the number at the end of the current month, we’ll move to the 4th or 5th position which is an example in the world,” Health Services Division Secretary Md Abdul Mannan said on Thursday.

Mentioning that Bangladesh started the vaccination programme earlier than many other countries, Health and Family Welfare Minister Zahid Maleque on Thursday said 2 million more doses of the vaccine will arrive from the Serum Institute of Indian (SSI) in February and 5 million in the next month.

The number of people receiving the Covid-19 vaccine is increasing in the country every day with highest 261,945 getting their first doses on Thursday.

On Wednesday, around 2.27 lakh people were inoculated against the coronavirus across the country.

Of those vaccinated on Thursday, 164,936 were males and 97,009 females, according to the Directorate General of Health Services (DGHS).

Of them, only 27 reported side effects.

With this, a total of 1,848,313 people have so far received their first doses of Oxford-AstraZeneca (Covishield) vaccine in the country.

Some 31,160 people were vaccinated on February 7 when the nationwide vaccination began.

The country has already received 7 million doses of Covishield vaccine, including 2 million as a gift from the Indian government.

The government has signed an agreement to import 30 million doses of Covid-19 vaccine developed by Oxford-AstraZeneca and manufactured by the SII.

The government will inoculate nearly 140 million people against Covid-19 in phases under a Tk 6,786-crore pandemic preparedness project.

Addressing the virtual meeting on Wednesday, the UN secretary-general said just 10 countries have administered 75 per cent of all Covid-19 vaccines.

The UN and partners have established COVAX Facility so that all countries will have access to vaccines, regardless of their wealth and the global mechanism must be fully funded, he said.

“But we must do even more,” the UN secretary general added. “The world urgently needs a Global Vaccination Plan to bring together all those with the required power, scientific expertise and production and financial capacities.”

Guterres proposed that the world’s richest countries, the G20 nations, form an Emergency Task Force to prepare the plan and coordinate its implementation and financing.

The task force would work to mobilise pharmaceutical companies and key industry and logistics actors, he said, underlining the UN’s readiness to support this effort.