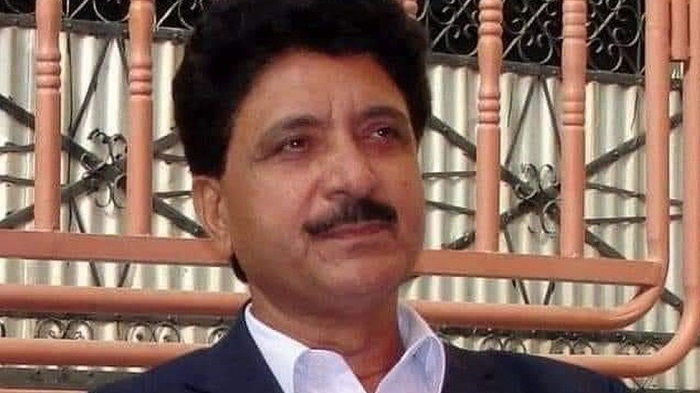 A British-Pakistani activist, Yousaf Ali Khan, is facing trial in Pakistan on charges of sedition and "conspiring to wage war" against the state.

Mr Khan is accused of making incendiary remarks advocating violence in a speech in London broadcast on social media.

A British citizen, he heads the UK branch of a protest movement critical of Pakistan's powerful military.

Mr Khan has lived in the UK for some 20 years, and was visiting Pakistan for a family funeral when he was detained.

Yousaf Ali Khan was arrested on Saturday night, when a large number of heavily armed police surrounded the family's home in Swabi in Khyber Pakhtunkhwa province, in the north of the country, his brother told the BBC's Secunder Kermani in Islamabad.

Mr Khan is president of the UK chapter of the Pashtun Tahafuz Movement (PTM), which campaigns for accountability for alleged human rights abuses committed by the Pakistani army whilst fighting against Islamist militants on the border with Afghanistan. It draws support from sections of Pakistan's ethnic Pashtun population.

Legal documents show Mr Khan is accused of promoting "hatred" and "violence". At one point in a speech made in north London in December 2019, Mr Khan appears to suggest whenever a bomb blast occurs in a Pashtun-dominated area either in Pakistan or neighbouring Afghanistan, it should be reciprocated with an explosion in Lahore, a majority non-Pashtun city.

The PTM has consistently stressed it is a peaceful movement. Some members of the group distanced themselves from Mr Khan's comments, whilst others suggested they were not intended to be taken literally. His lawyer has dismissed the charges as unfounded.

Human rights groups have in the past raised concerns about a number of separate legal cases against other figures linked to the PTM, suggesting they form part of a wider clampdown on dissenting voices in Pakistan.

Mr Khan's trial will be conducted by an anti-terrorism court in the northern city of Mardan. The UK's Foreign Office has told the BBC it is in contact with local authorities about the arrest of a British man in Pakistan.