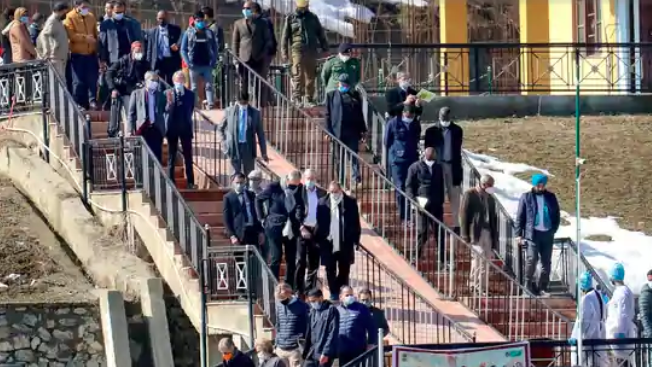 On the first day of their visit to Jammu and Kashmir, a group of foreign envoys interacted with elected representatives of all political parties on Wednesday. Speaking about the District Development Council (DDC) polls held last year, Srinagar Municipal Corporation Mayor Junaid Mattu said that all the agreed that there were free and fair elections, ANI reported. "Free and fair elections are the biggest attestation to the empowerment of democracy," the news agency reported Mattu as saying.

The group of envoys including those from several Europe Union countries are in the union territory to take first-hand account of the situation in Jammu and Kashmir and government's efforts to restore normalcy.

Srinagar mayor also said that the visiting dignitaries were apprised of the "landmark elections of DDC and urban local bodies." "They wanted to know the ground realities," he also said. Elected representatives from all political opinions and parties participated in the discussion which was held at the Sher-e-Kashmir International Conference Centre (SKICC) on the banks of the Dal Lake.

The envoys which has representation from four Organisation of Islamic Countries (OIC) -- Malaysia, Bangladesh, Senegal and Tajikistan -- were taken to Magam in central Kashmir amid heightened security arrangements in the city and elsewhere in the Valley, officials said.

Speaking after the discussion, Juan José Cortez Rojas, Charge d Affaires, Embassy of Bolivia in Delhi, lauded the Centre and said, "What we are realising is that democracy took place here. It is impressive." He also said that people here are happy with the political decisions taken by the central government.

This is the third delegation that has arrived in Jammu and Kashmir since the government abrogated the erstwhile state's special status on August 5, 2019 and bifurcated it into two union territories by carving out Ladakh. The first two groups visited Jammu and Kashmir in January and February 2020.

On the second day of their visit on Thursday, the diplomats will travel to Jammu region for more meetings and interactions.