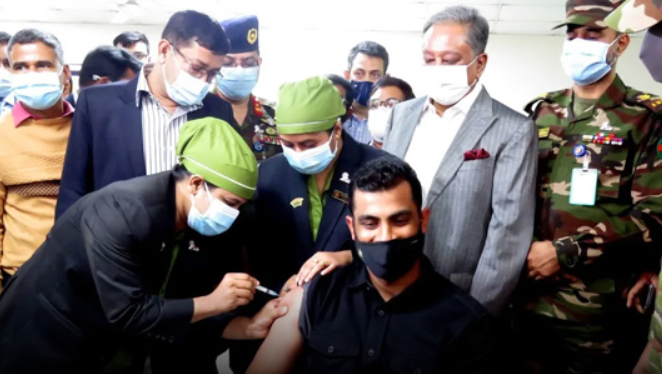 A number of Bangladesh cricketers and coaching staff have taken the vaccine of coronavirus at the Kurmitola General Hospital on Thursday.

The cricketers who are expected to be named for Bangladesh’s tour in New Zealand get the priority in being vaccinated under the supervision of the Bangladesh Cricket Board (BCB).

“Those who are in the priority list for the New Zealand tour and coaching staff get vaccinated today,” said BCB president Nazmul Hassan Papon, who were present during the vaccination of the cricketers.

“Till now I have seen Soumya Sarkar, Tamim Iqbal, Taskin Ahmed and Mehidy Hasan Miraz who are taking the vaccine. Some other players will take this vaccine. Our director Jalal Younus also got vaccinated as he will be with the team during the tour. There were some problems for the foreign coaching staff since they have no National ID card in Bangladesh but the government was gracious enough to make an arrangement for them,” he added.

Soumya Sarkar was the first cricketer to get vaccinated.

“I think your fear about vaccines will be reduced if you know how helpful it is. I will not deny that I was afraid,” Bangladesh opener Tamim Iqbal said.

“When the first approach was made, I was not sure whether to take it or not. But after talking to the BCB and when many people suggested that it is normal to have syndromes, it seemed to me that I could take it.”

The BCB Chief Physician Dr Debashish Chowdhury said it is not mandatory for cricketers to take the vaccine before the New Zealand tour and said the board will arrange to vaccinate those who want to take it later.

Bangladesh will play three ODIs and as many T20Is in New Zealand next month. The Tigers will leave the country on February 23.