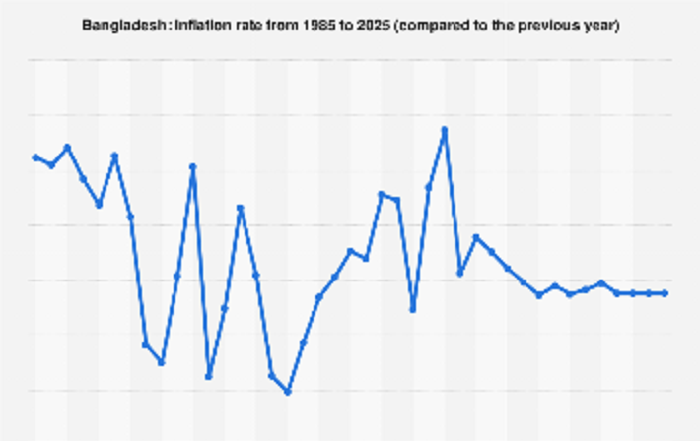 Statistics and Informatics Division Secretary Mohammad Yamin Chowdhury said on Thursday Bangladesh has been witnessing a healthy inflation trend over a certain period of time thanks to various proactive measures taken by the government.

“If there is no inflation in the economy, then it won’t be a good and dynamic economy for which there is a need for having a certain level of inflation all the time,” he added.

The Statistics and Informatics Division secretary was addressing at a workshop titled “Stakeholder (media) Consultation Workshop” as chief guest organized by Bangladesh Bureau of Statistics (BBS) for the members of the Bangladesh Development Journalist Forum (DJFB) at the BBS auditorium in the city.

Turning to the issue of CPI again, Yamin said if there is not an expected level of inflation in an economy, then there would be no such investment.

He said it is also not good for an economy if the inflation rate dips below 5 percent or shoots up much more than 5 percent.

The secretary said a survey was carried out during the COVID-19 period where it was found that the cause of deaths from various diseases in the country was much higher than the deaths from pandemic.

Quoting the survey findings, he mentioned that some 5,002 people in Bangladesh died from COVID-19 during the survey period, but around 1.80 lakh people died from various heart-related diseases. That survey proved that deaths from other diseases were much higher than the deaths from pandemic in Bangladesh and thus the general perception of the commoners was changed, Yamin added. BBS director general Mohammad Tajul Islam said that they are hopeful of materializing a National Population Register (NPR) in the country which is expected to reduce fraudulence to a big extent.