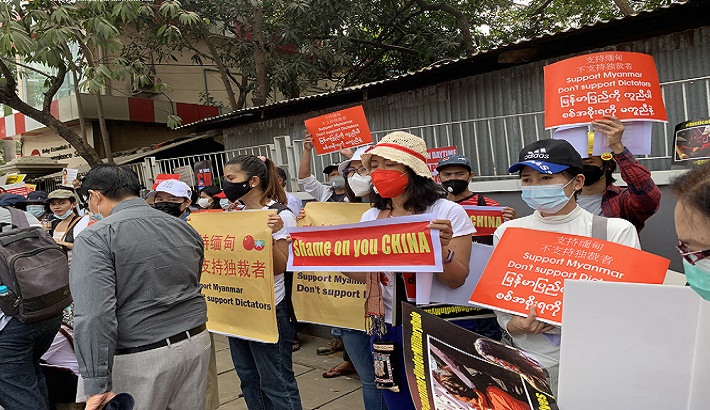 China’s failure to condemn Myanmar’s military coup is sparking increased anger across Myanmar as mass protests against the regime sweep the country.

The Chinese Embassy in Yangon has attracted thousands of anti-coup protesters every day in the last week. Anger toward Beijing grows as China continues to defend the military regime calling the coup an “internal affair” at the United Nations Human Rights Council.

The embassy protest was larger on Monday with placards reading, “Shame on you”, “Justice is blind, coup is a crime, China is behind it”, “China breaks our democracy”, “Myanmar’s military dictatorship is made in China” and “China bullies Myanmar”.

A placard read, “China should do the walk of shame”, in reference to Cersei Lannister in the Game of Thrones series who was forced to walk naked through the streets to pay for her crimes.

“We are mad at China. We are demanding that China stop supporting the military but its support continues,” Ma Su Theingi Htun, a 24-year-old student, told The Irrawaddy. “We must put pressure China to show the Burmese do not accept the military government. I will keep coming until they understand.”

Young protesters stand close to barricades in the front of the embassy gates, showing placards to CCTV cameras reading: “Support Myanmar, don’t support dictatorship”, “China and Russia secretly help Myanmar’s military, the world must know” and “China takes our resources. Why do you want more?”

China was the closest ally of Myanmar’s military while the country was isolated under the previous military regime. China is a major supplier of military hardware and technology. The foreign ministry in Beijing rejected reports that it supported the coup.

It has also denied reports that it has helped the military regime build internet firewalls to block online freedom and access personal data. Five cargo flights arrived in Yangon from Kunming in Yunnan Province last week. China claimed they were only carrying goods like seafood.

While the regime cut the internet on Sunday night, three more flights from Kunming landed at Yangon International Airport.

“China said it sent seafood last week. What was it this time?” an 18-year old art and culture student, who asked not to be named, told The Irrawaddy. She held a placard reading, “Take back your seafood.”

“China is involved in this coup. Young people won’t stand for it. We will boycott all Chinese products and spread campaigns against imports,” she said.

China and Russia blocked attempts to condemn the military takeover at the UN Security Council and Beijing only described the coup as a “major cabinet reshuffle”, sparking young people to start online campaigns against Chinese products.

Sai Htet Soe San, a 19-year-old student, told The Irrawaddy: “Anti-China sentiment is growing among the young. As long as China fails to condemn the military, we will say it is supporting the military.”

Young people are urging staff from Myanmar working on the China-Myanmar oil and gas twin pipeline project to join the civil disobedience campaign. A strike could suspend work on the project, they say.

Last week, work in the China-backed copper mines in Monywa Township was suspended after more than 2,000 miners from the Kyisintaung copper mine joined the civil disobedience movement. The Letpadaung Taung copper mine in Sagaing’s Salingyi Township also stopped operations after thousands of employees joined the movement.

A Kachin activist, Daw May Sabe Phyu, the director of the Gender Equality Network, told The Irrawaddy that she is protesting at the Chinese Embassy to condemn China’s defense of the military at the United Nations.

“I want to let China know our people strongly reject its policies. China must support the people, not the military,” she said.

“We call on democratic states to put pressure on countries like China which are defending the Burmese military,” she said.