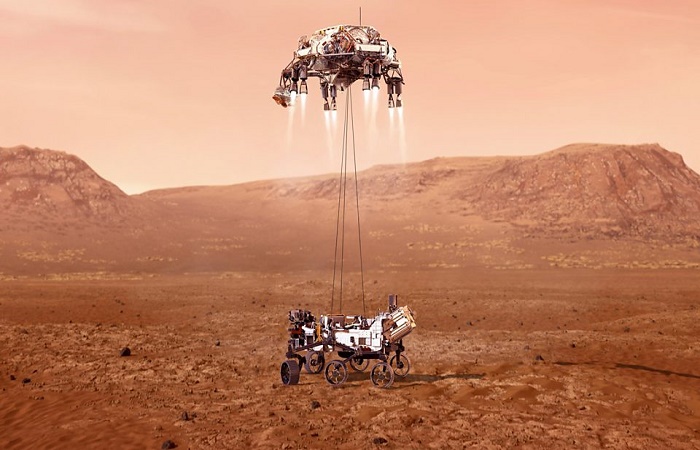 The moment of truth has arrived for the US space agency's Perseverance rover.

The six-wheeled robot is fast approaching Mars after a seven-month, 470-million-km journey from Earth for what unquestionably will be the most challenging part of its mission.

It's got to put itself down safely on the Red Planet - a task that has befuddled so many spacecraft before it.

But if Perseverance is successful, it has an amazing opportunity to find signs of past life on Mars.

Never has a science mission gone to the planet with so sophisticated a suite of instruments; never has a robot been targeted at so promising a location.

Jezero Crater, the intended touchdown zone, bears all the hallmarks in satellite imagery of once having held a giant lake. And where there's been abundant water, perhaps there's been biology as well.

Perseverance will sift and drill into the sediments to look for traces of ancient microbial activity. The most propitious examples will be packaged for return to Earth by later missions.

"But before we can get that surface mission going, we have to land on Mars and that is always a challenging feat," said Matt Wallace, Nasa's deputy project manager for Perseverance.

"This is one of the most difficult manoeuvres we do in the space business. Almost 50% of the spacecraft sent to the surface of Mars have failed, so we know we have our work cut out to get down safely at Jezero."

Perseverance is on a path to engage the Martian atmosphere late on Thursday (GMT).

It will plunge into the rarefied air at more than 20,000km/h and it will have to reduce this to near-walking pace by the time it reaches the surface - a daunting prospect that Nasa engineers half-jokingly call the "seven minutes of terror".

The robot's protective capsule will do most of the work of scrubbing off the entry speed but a supersonic parachute and a rocket jetpack, or "Sky crane", will be needed for the last three minutes of braking and surface placement.

Much is made of the difficulty of mounting Mars missions, and it's true many have failed. But the statistics actually favour Perseverance.

Of the 14 landing attempts at the planet, eight have been successful - all of them American. Indeed, Nasa has only got it wrong once, way back in 1999.

Engineers will be following proceedings at mission control at the Jet Propulsion Laboratory in Pasadena, California.

Telemetry from the rover during its descent will be relayed by an overflying satellite - the Mars Reconnaissance Orbiter. The team will also be listening to a series of low-data tones coming back direct from the robot itself.

A signal confirming touchdown should arrive at Earth at 20:55 GMT.

With luck, we could even be looking at the first pictures of Jezero just a few minutes afterwards.

Why is Jezero Crater so interesting?

Jezero is named after a town in Bosnia-Herzegovina. In some Slavic languages the word "jezero" also means "lake" - which should explain the fascination.

This 500m-deep bowl once saw huge volumes of water flow in through the western wall to pool on the crater floor.

Where the water entered, it even deposited sediments to form a delta. Perseverance will try to land next to this feature.

Jezero displays multiple rock types, including clays and carbonates, that have the potential to preserve the type of organic molecules that would hint at life's bygone existence.

Particularly enticing is the "bathtub ring" of sediments laid down at the ancient lake's shoreline. It's here that Perseverance could find what on Earth are called stromatolites.

"In some lakes you can get microbial mats and carbonates interacting to form these big structures, these large layered mounds," explained science team-member Dr Briony Horgan from Purdue University in West Lafayette, Indiana.

"If we see anything like that kind of structure in Jezero, we'll be making a beeline straight for it because that could be the holy grail of Mars astrobiology," she told BBC News.

While the scientists will be engrossed in what Jezero's rock types and their chemistry can tell us about past life on Mars, the public can simply lose themselves in the sensation of experiencing another planet in unprecedented detail.

The rover will land with more than 20 cameras (four are on the Sky crane which will be sent away to crash after touchdown). These work in colour. Some are zoomable. They'll also be making movies.

In addition, two microphones are going down to the surface. We'll hear the sound of the wind rushing past the rover, and the noise the robot's wheels make as they crunch across the rocky terrain.

Of huge interest will be the experiment to fly a mini-helicopter that's hitched a ride with Perseverance. This will be released on to the ground from under the robot in the weeks after landing and should make at least five brief flights. It is being described as a "Wright brothers" moment on another world.

Perseverance has initial funding from Nasa to operate for one Mars year (687 Earth days).

In that time it's expected to cache a couple of dozen drilled rock samples in small tubes, which will be left on the surface.

Nasa and the European Space Agency (Esa) have devised a multi-billion-dollar plan to go fetch these cylinders towards the end of the decade.

It will be a complex endeavour involving a second rover, a Mars rocket and a huge satellite to ship the Jezero materials home.

"We want to send these follow-up missions in 2026 so that we can get the samples back on Earth in 2031," said Dr David Parker, the director for robotics and human spaceflight at Esa.

Retuning samples is the logical - and necessary - next step in Mars exploration.

Even if Perseverance discovers something that looks like a bio-signature, the evidence is almost certain to be contested - as claims for ancient life's traces here on Earth usually are.

Bringing rocks back for further, more sophisticated analysis is therefore likely the only way any arguments about past biology on the Red Planet will be settled.