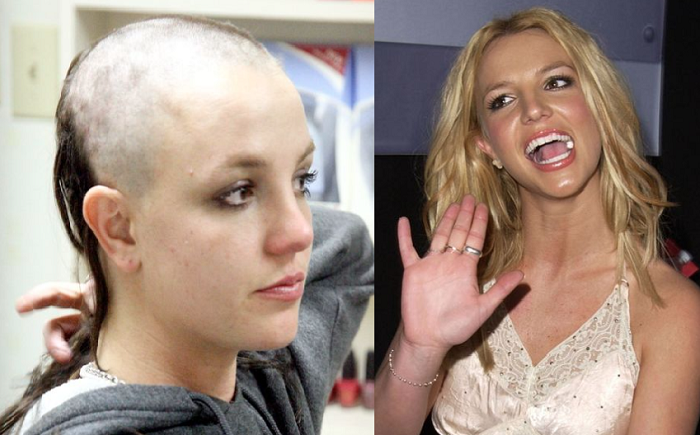 Britney Spears took a hair clipper to her own hair in the midst of a devastating breakdown in 2007 and shared her reasons with one woman.

When Britney Spears suffered a tragic breakdown in 2007, she endured it in the most public of ways.
As the former Disney star's life unravelled over the space of 14 months, each heartbreaking step was chronicled - something that wouldn't happen now thanks to a massive shift in attitude towards mental health issues.

And one of the most profoundly tragic images to come out of that period was that of Britney taking a set of hair clippers to her own head.

According to 2019 documentary, Britney Spears - Breaking Point, the awful scenes unfolded after she turned up unannounced at ex-husband Kevin Federline's house, asking to see their sons Sean and Jayden.

Her request was reportedly refused, and the angry and frustrated star apparently then drove to a random hair salon and asked hairdresser Esther Tognozz to shave her head in front of more than 70 members of the paparazzi.

Tognozz tried to talk her out of it, but once her back was turned, Britney grabbed the clippers and sheared her locks herself. Meanwhile, her bodyguards did nothing.

"She had two bodyguards supposedly keeping an eye out to make sure the paparazzi were not getting any pictures," Tognozz recalled in the Channel 5 documentary, as footage showed aides laughing with photographers.

The saddest part though, was Britney's expression as her smile gave way to panic and grief once she realised what she'd done.

Crestfallen, she fretted that her "mum was going to be p***ed" before moving on to Body and Soul Tattoo studio.

Sign up to get all the latest news in your inbox here.

There, tattooist Emily Wynne-Hughes recalled hearing "an insane roaring sound outside" as Britney and the paps pulled up.

"I wasn't sure what was happening, if there was a riot outside and then the flashes came. The door opened slowly and a hooded figure walked in the door," she said.

And it was Wynne-Hughes who Britney chose to confide in about her reasons for shaving her head - details she shared for the first time in 12 years in the documentary.

"I noticed her hair was gone. I remember asking here, 'why do you shave your head?' And her answer was a bit weird," the tattooist says.

Indeed, Britney's image had apparently been controlled by music execs since she first burst onto the scene with ...Baby One More Time in 1998.

According to reports, they micro-managed every detail of her appearance, right down to her underwear.

But as she sat there unravelling, Wynne-Hughes said this time Britney's team had no interest in intervening.

"It just didn't seem like they cared very much. I've felt this insane sense of anxiety and energy that felt so negative," she said.
"It just seemed like everybody was waiting for the crash to happen."

Britney's tragic story is being revisited in a new documentary produced by the New York Times, Framing Britney Spears, which airs in the UK tonight.

It takes a close look at her mental health battles and the controversial conservatorship she has been under since her stay in psychiatric care in 2008.