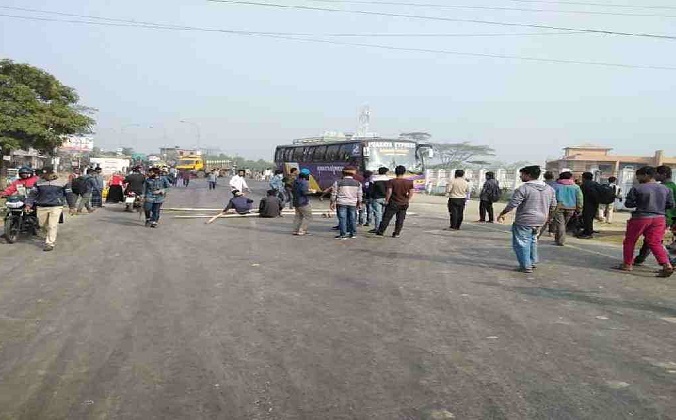 Students of Barishal University have been protesting in the city since Wednesday morning against an attack on some of their fellows by local transport workers on Tuesday.

Witnesses said the protests began around 7:00 am when scores of university students blocked traffic on the busy Barishal-Patuakhali highway, demanding immediate action against the perpetrators of Tuesday's attack that left 11 scholars injured.

On Tuesday, two students of the university were allegedly manhandled by few staffers of Bangladesh Road Transport Corporation (BRTC) at BRTC bus counter in the Rupatoli area of the city.

In protest, some students of the university blocked the bus terminal for two hours. They dispersed only after police arrested one BRTC employee, identified as Rafique, in connection with the attack.

In retaliation, the transport workers armed with sticks barged into a university hostel and attacked a student, identified as Mahmudul Hasan Tomal, on the intervening night of Tuesday and Wednesday.

As the news of the attack spread, thanks to social media, students from other hostels of the university rushed to the spot to save Tomal. The transport workers attacked Tomal's rescuers too, leaving 11 injured.

Dr Subrata Kumar Das, proctor of Barishal University, said that as soon they got the information of the attack, senior officials rushed to the spot and subsequently ensured proper treatment to the injured.