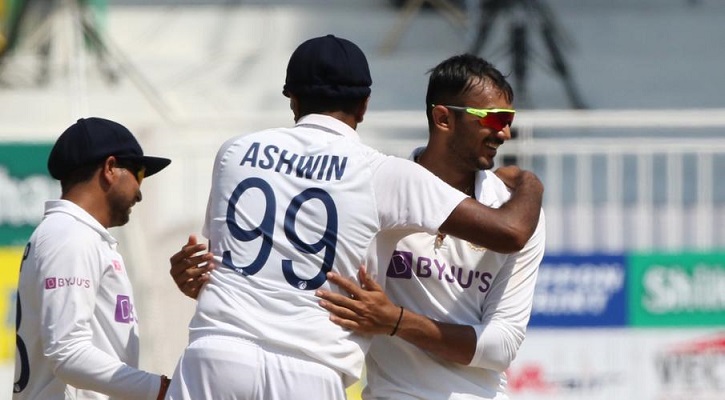 Ravichandran Ashwin took two more wickets on Tuesday as India closed in on victory in the second Test with England still 366 runs behind their target.

Resuming on 53-3, England reached 116 for seven when Kuldeep Yadav sent back Ben Foakes for two and umpires called lunch on day four.

Skipper Joe Root was batting on 33 in England's chase of 482.

Ashwin got Dan Lawrence stumped for 26 on his first delivery of the day with wicketkeeper Rishabh Pant acting swiftly behind the stumps.

Root and Ben Stokes put on 24 runs for the fifth wicket but Ashwin had Stokes caught at slip for eight to take his match tally to eight wickets.

He now has three wickets in the innings on top of his five in England's first innings.

Fellow spinner Axar Patel took the wicket of Ollie Pope for 12. The left-arm spinner has taken three this innings.

Root survived a reprieve on 32 when he miscued a reverse sweep and Mohammed Siraj dropped an easy chance at backward point off spinner Yadav.

The Chennai-born Ashwin hit 106 on day three in India's second innings score of 286 as they handed England a record chase on a turning track.

Ashwin's five wickets helped bowl out England, who lead the four-Test series 1-0, for 134 in response to India's 329.