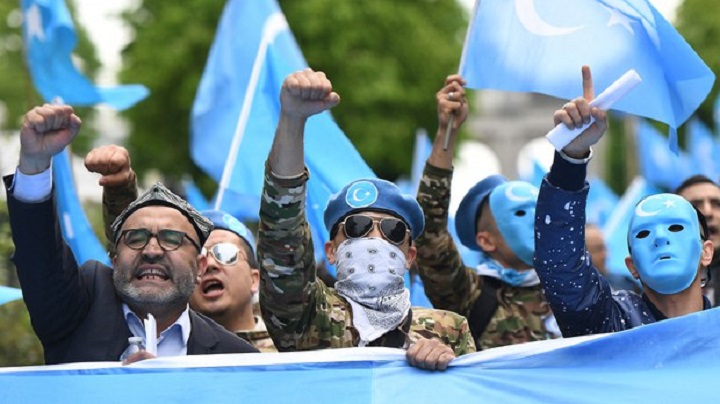 Ethnic Uyghurs march during a demonstration against China in Brussels, April 27, 2018.

Lawmakers in Belgium’s Chamber of Representatives have submitted a resolution calling on their government to designate abuses in northwest China’s Xinjiang Uyghur Autonomous Region (XUAR) as genocide, prompting an immediate protest from Beijing demanding that the proposal be tabled.

On Thursday, Samuel Cogolati and Wouter de Vriendt, both members of the Ecolo-Groen grouping, put forth the proposal based on mounting evidence of China’s policies of mass sterilization and forced abortions that they called part of “a coercive birth repression campaign,” as well as the transfer of large numbers of children whose parents are detained in the region’s internment camps into state orphanages.

Authorities in the XUAR are believed to have held up to 1.8 million Uyghurs and other Muslim minorities in a vast camp network as part of a campaign of mass extralegal incarceration since early 2017. Chinese officials have said the camps are centers for “vocational training,” but reporting by RFA and other media outlets shows that detainees are mostly held against their will in cramped and unsanitary conditions, where they are forced to endure inhumane treatment and political indoctrination.

The resolution, which was co-written with representatives of the Munich-based World Uyghur Congress (WUC) exile group, also calls for Belgium to introduce mandatory due diligence legislation to address concerns over forced labor in the XUAR and will be debated “in coming months.”

In a statement on Thursday, Cogolati, who is also the co-chair of the Inter-Parliamentary Alliance on China (IPAC) that has called on democratic countries to take a tougher stance on Beijing, said that Belgium should block approval of the Comprehensive Agreement on Investment that the EU and China concluded in December amid a growing number of reports of atrocities in the XUAR.

“We cannot continue to do ‘business as usual’ with China while mounting evidence documents the most horrific state perpetrated human rights abuses against Uyghurs and other groups in the Xinjiang region,” he said.

“It is unacceptable that the EU has caved on human rights to seal its investment deal with China. The message from Belgium and across Europe must be clear: no deal without China’s ratification of international forced labour standards.”

The WUC welcomed the resolution on Thursday, with president Dolkun Isa expressing hope that Belgium’s government will “act upon its demands by formally recognizing the Uyghur genocide and taking concrete action to put an end to it.”

China’s Foreign Ministry had yet to issue a formal statement in response to the resolution as of Friday.

But speaking to RFA’s Uyghur Service, Cogolati said the proposal quickly “provoked a huge wave of reactions, especially and not surprisingly, heavy reactions from the Chinese Embassy in Belgium.”

“So I must admit I was a bit shocked from that reaction. It's extremely, extremely rare that you have a third country, even like China, intervening and saying, in a democratic model and in a parliament, what we should or should not discuss."

China has gone on the propaganda warpath against its critics in recent months but has been forced to play whack-a-mole as new and damning reports continue to emerge about the situation in the XUAR.

Last week, a report by the BBC included interviews with four women who claimed they were “systematically raped, sexually abused, and tortured” while held in the internment camp system, which China’s Foreign Ministry and state media quickly dismissed as lies, repeating claims that there are no camps in the region and attacking the credibility of the women profiled in the piece.

On Thursday, the National Radio and Television Administration announced that BBC World News would no longer be permitted to broadcast within China and that it would not accept the channel’s broadcast application for the new year. Strict controls meant the service was not widely available to the public in China.

Cogolati acknowledged that any vote to fully adopt the resolution “will not be easy because of the pressure” and said significant advocacy will be required to convince his colleagues and other stakeholders of the need to do so.

But he said that he remains hopeful the resolution will pass because of growing opposition to China’s policies within civil society and among the public.

“And so I keep faith that one day, and hopefully and the sooner the better, we may adopt this resolution formally and formally recognize the atrocities committed by China as being a crime of genocide.”