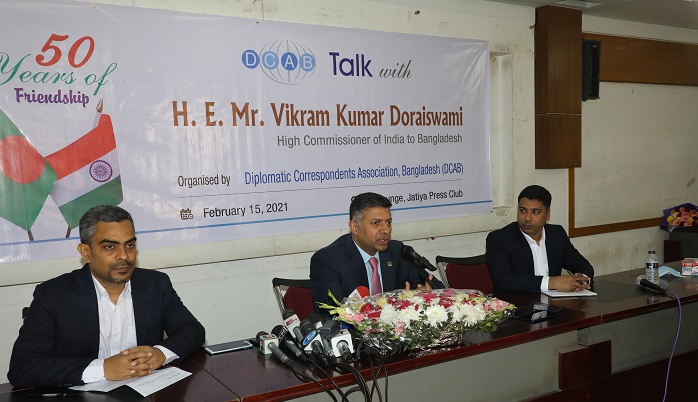 Indian Prime Minister Narendra Modi’s upcoming visit to Bangladesh in March to join the golden jubilee celebrations of Bangladesh's Independence, India-Bangladesh diplomatic relations, and the birth centenary of Bangabandhu will further consolidate the strong friendship between the two countries and carry forward the relations in the next half century.

“There is a bipartisan consensus in India about the importance of Bangladesh. For us, friendship with Bangladesh is the cornerstone of India's foreign policy," said High Commissioner of India to Bangladesh Vikram Kumar Doraiswami.

Bangladesh remains one of their most important relationships and every government and each Prime Minister of India invested in the best possible ties with Bangladesh, he added.

The High Commissioner said India is committed to take forward the relations with Bangladesh in the next 50 years and beyond focusing on mutual benefit expanding it in all areas.

Speaking at the DCAB talk organised by Diplomatic Correspondent Association of Bangladesh (DCAB) at Jatiya Press Club on Monday, he said the planned visit of Narendra Modi is aims to carry forward the existing excellent ties with Bangladesh for next half a century.

“The objective of the Prime Minister’s visit is of course to consolidate our friendship and to build it forward for next 50 years,” Doraiswami said and hinted further directives from the summit leaders on the shared future and responsibility during the ensuing visit of the Indian Prime Minister.

Though the two countries have not formally make any announcement regarding the visit of Modi but it is planned following the invitation extended by Bangladesh Prime Minister Sheikh Hasina. Modi will join with the Bangladeshis in celebrating the most momentous anniversary on the calendar.

The Indian envoy said senior officials of both the countries are working on different instruments that would be inked between the two nations during the visit of Modi. “We are working on a number of outcomes of the visit, many things are to be finalised between the line ministries agencies” he added.

He talked about partnership in the energy sector, people-to-people ties and larger political relationships and all these things are negotiated. A number of things are needed to be finalised, he added.

He said there will be historic component, government to government component and cooperation in specific areas during the upcoming visit of the Indian Prime Minister as the two nations want to take forward the relations in the next 50 years and beyond.

Prime Minister Sheikh Hasina has already thanked Prime Minister Narendra Modi for accepting her invitation to visit Bangladesh in person in March 2021 to join the celebrations on the occasion of 50th anniversary of Bangladesh’s Independence and 50 years of Bangladesh-India diplomatic relations.

He said a strong, stable, prosperous and flourishing Bangladesh is in India’s fundamental national interest and added that India recognise that the benefit of the relations must be mutual.

“Both sides must benefit from our relationship. This is exactly what we are committed to doing. We want stronger development partnership with Bangladesh; expand our relations in trade as trade has to be the future, stronger people to people ties and every sector of human activities,” said the High Commissioner.

Responding to question on water sharing of common rivers, the Indian envoy said given the complexities of Teesta, specially internal challenges in India, things on other six rivers can move forward in a much faster way. “I think we should put in a lot of efforts on that.”

“Our government is committed at the highest level regarding Teesta. Our friends also need to understand this is not a matter on which the government of Delhi has a single say. It does require bringing all stakeholders on board,” he said.

“We understand and acknowledge the importance of sharing water.” He said water must be shared as equitably as possible. “So, we are committed to this.”

The High Commissioner said they can come close to interim water sharing framework for six rivers with progress on data harmonization. The two countries underscored the need for early conclusion of Framework of Interim Agreement on sharing of waters of six joint rivers, namely, Manu, Muhuri, Khowai, Gumti, Dharla and Dudhkumar.

On another question, he said Bangladesh and India agreed that loss of civilian lives at the border is a matter of concern and directed the border forces concerned to enhance coordinate measures to work towards bringing such border incidents to zero.

In reply to another query, he said India has offered Covid-19 vaccines to Bangladesh Armed Forces.

"Yes, we have offered. We will be happy to provide vaccine to Bangladesh Armed Forces," he said.

Earlier, India provided two million doses of Oxford-AstraZeneca vaccine to Bangladesh as gift. Bangladesh is also buying bulk amount of the much-needed vaccine from the Serum Institute of India.