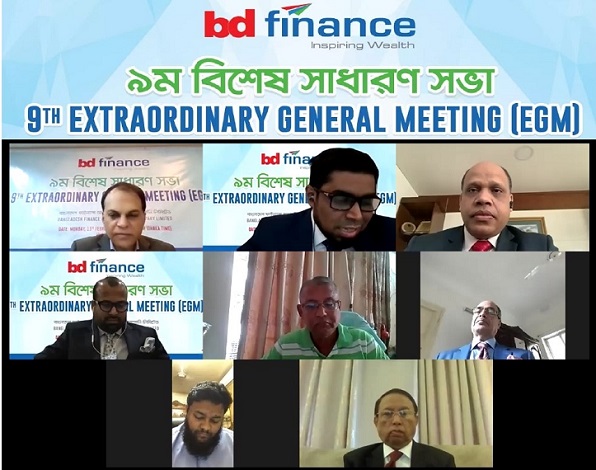 In the EGM, Shareholders of the company also approved amendment in the objective clause of the memorandum and inclusion of appointment of shariah Supervisory Committee in the Articles of Association for the operation of Islamic wing.

Bangladesh bank recently has given its kind consent to establish a separate Islamic wing of BD Finance to deal with Shariah based Islamic Finance and offer a complete range of Shariah compliant Islamic financing solutions.

In the meeting, the Chairman of BD Finance Mr. Manwar Hossain said “we do not consider ourselves the owners of BD Finance; rather we are the custodian of our people’s money and interest. We hope to defend the interest of our stakeholders constantly. By introducing Islamic Wing, we will soon enter into a new era towards progress.”

Mentioning the rename of BD Finance, Md. Kyser HamidManaging Director & CEO said “the new name ‘Bangladesh Finance’ representing the national spirit of Bangladesh to mark its 50th anniversary of the Liberation War. We want to represent Bangladesh Finance as the Financial Institute of all people of the country,” He also said  BD Finance is now the only listed FI which has both the Islamic and Conventional wing license. Considering the overall improvement, he also added that BD Finance has improved in credit ratings from Single A to Double A.