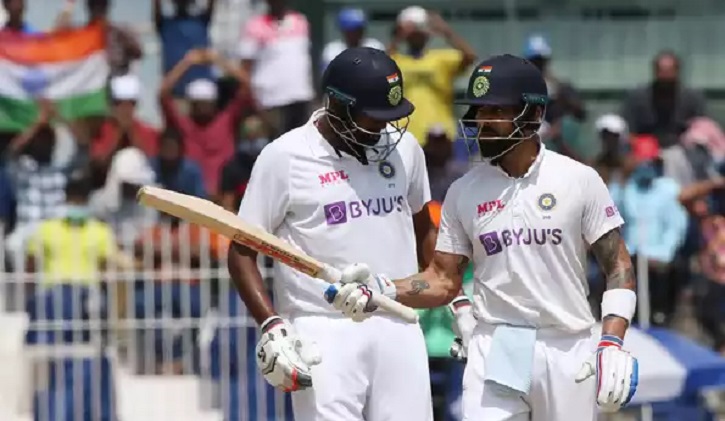 Virat Kohli and Ravichandran Ashwin hit half-centuries to push India's second innings lead over England to a daunting 416 on day three of the second Test on Monday.

India reached 221 for eight at tea in Chennai after resuming the day on 54-1.

Ashwin, on 68, and Ishant Sharma, on nought, were batting.

Kohli and Ashwin put on 96 runs for the seventh wicket, resisting for over two hours, after spinners Jack Leach and Moeen Ali hit back in the morning session with two wickets apiece.

Kohli, who failed to score in the first innings, took 20 balls to get off the mark but moved on to his 25th Test fifty.

He finally fell to Ali's off spin, trapped lbw for 62 and walked back after an unsuccessful TV review.

Ashwin, who claimed his 29th five-wicket haul to help bundle out England for 134 in response to India's 329 first innings, survived two drop catches on 28 and 56.

In the first session, Cheteshwar Pujara went for seven after a freak run out when his bat jammed behind the crease while attempting to get back following a flick to short leg.

Sharma, who made 161 in India's first innings, added one to his overnight 25 before being stumped by wicketkeeper Ben Foakes off Leach.

Foakes, who was 28 on Monday, was in action again to send back his Indian rival Rishabh Pant, stumped for eight off Leach again.

The stadium witnessed a security breach in the lunch break when a boy walked onto the ground from the stands near where players from both sides were practising. Security guards escorted him away.

Fans have been allowed into a stadium in India for the first time since the coronavirus pandemic hit.