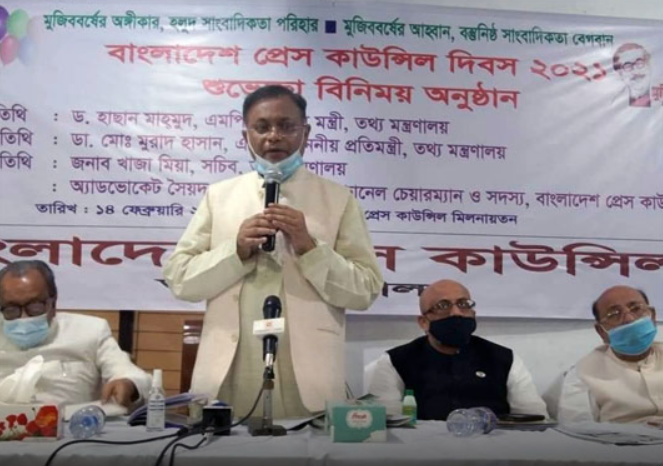 Information Minister Dr Hasan Mahmud said on Sunday freedom and accountability both are the most crucial in the advancement of mass media.

“Father of the Nation Bangabandhu Sheikh Mujibur Rahman had formed the Press Council aiming to ensure independence of the mass media, so that, media can act properly as the mirror of the society,” he said, addressing a discussion at Press Council auditorium in the city.

The minister said the press council was formed so that media can refrain itself from publishing false and untrue information.

Mentioning that the Press Council has been working with utmost sincerity since its inception, Hasan said, “Today is the Press Council Day. The day has been observed since 2017. The role of mass media is the most important in creating a multidimensional society. And we believe in free flow of information and freedom of mass media.”

The minister said the state is moving ahead indomitably under the dynamic leadership of Prime Minister Sheikh Hasina and the country saw an exponential growth of mass media in the last 12 years.

“Everyone should keep in mind that accountability comes along with freedom”, said Hasan, also Awami League joint general secretary.

He said it should be ensured that one’s freedom does not infringe on another’s independence and interfere with other’s freedom of expression.

The minister said the government is working to amend Press Council act to increase its power so that the council can play an active role in ensuring both freedom of the press and accountability.

Hasan said the government is working for creating a multidimensional society to move the nation ahead. But, when the country is moving forward, vested quarters begin conspiracies at home and abroad, he added.

“We should remain alert against the conspiracies. And we will work together to move the country forward,” the minister said.

Murad, in his speech, greeted all concerned of Press Council and all mass media employees marking the Press Council Day. He hoped that the BPC would play more pivotal role in the days to come.

Khaja Mia said, “It is our responsibility to move ahead the press council established by Father of the Nation Bangabandhu for the interest of the country, its people and mass media.”

Replying to a query over a comment of BNP leader Ruhul Kabir Rizvi, the minister said there might be two reasons of his (Rizvi) speech. “One is that, like the way they conspired against Bangabandhu, they have been involved in various conspiracies against the government for 12 consecutive years. Being isolated from mass people, they have chosen the path of conspiracy,” he added.

Another is that they are now dependent on destiny after isolating from the people, the minister said.

Replying to another query about BNP’s rally, Hasan said, “I saw and heard the speeches of BNP leaders at newspapers and televisions. If the gathering of hundreds of people in Dhaka city out of 2 crore people is a huge gathering, the world is getting smaller for BNP and it is necessary to understand how isolated they are from the people.”

And, yesterday they blocked the road despite repeated requests from the police to create a disturbance, he said, adding police performed their duties for the common people.