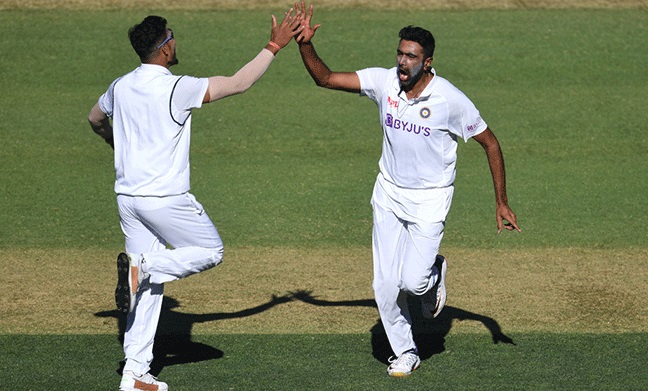 India built a commanding lead of 249 after spinner Ravichandran Ashwin helped skittle England for 134 on day two of the second Test on Sunday.

The hosts were 54 for one at stumps in Chennai with Rohit Sharma on 25 and Cheteshwar Pujara on seven.

India are in sight of a victory that would level the four-match series after their crushing defeat in the opening Test.

Sharma, who hit 161 in India's first innings, survived a stumping chance on 20 when England wicketkeeper Ben Foakes failed to gather the ball to his left off Moeen Ali.

Jack Leach trapped Shubman Gill leg before for 14 with his left-arm spin and the opener walked back after an unsuccessful TV review.

Ashwin had earlier claimed five wickets as England collapsed in response to India's 329, conceding a lead of 195.

England assistant coach Graham Thorpe said it was one of the most difficult batting pitches he had seen.

"The guys have plans but they didn't happen today for us," said Thorpe.

But Ashwin said batsmen have to adapt on a spinners' pitch like they do on tracks that favour fast bowlers.

"It's about being very patient (on a turning track) like you play on a seaming wicket. You need to really tide through the early phase and then start putting runs on the board," he said.

"So I think the same kind of expectations and benchmarks need to be set on a challenging pitch."

England's Foakes made an unbeaten on 42 off 107 balls.

"It was extremely difficult (to bat) against a high-quality spin outfit and the pitch was playing tricks," Foakes told Channel 4 television.

"I just tried to play within my limits and try to play the ball late. I think some balls are taking the top of the surface and I was trying to stick to my game plan."

He added: "I think the wicket has plenty, if we bowl well we have a good chance of bowling them out."

England lost half their side for 52 when Ashwin bowled Ben Stokes for 18.

Foakes, taking the place of Jos Buttler who returned home after the opening win, put on 35 with Ollie Pope.

The pair batted for over 50 minutes before pace bowler Mohammed Siraj struck with his first ball of the Test, removing Pope for 22. Patel then dismissed Moeen Ali for six.

England had crashed to 39 for four in a dramatic morning session that saw the fall of eight wickets, including skipper Joe Root for six.

Ishant Sharma trapped Rory Burns leg before with the third ball of the innings.

But it was Patel claiming Root for his maiden Test wicket that raised the roof in the stadium where fans were allowed for the first time since the coronavirus pandemic erupted.

Coming into his 101st Test with scores of 228, 186 and 218 in his previous three matches, Root mistimed a sweep and was caught at short fine leg.

Earlier, Rishabh Pant hit an unbeaten 58 before India's innings ended in the first hour of play. They had resumed on 300-6.

Ali claimed four wickets, including two in his first over of the day. Fast bowler Olly Stone took three.