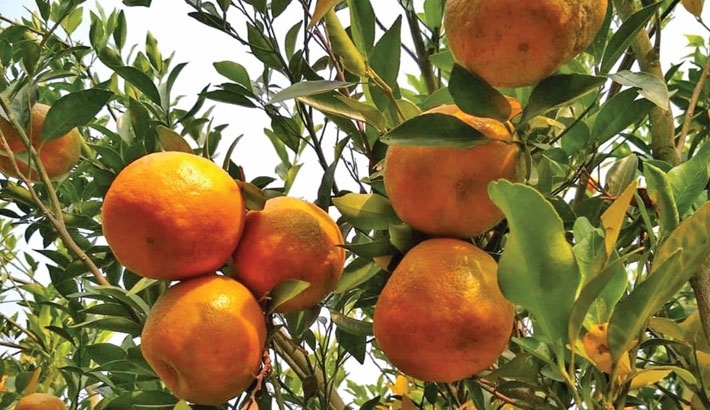 Commercial farming of orange has seen a huge success in Bangladesh, making the juicy fruit available throughout the year at reasonable prices.

Farmers are also making good profits by producing this popular fruit, both in plain lands and in hilly regions.

Dr. Mehedi Masood, project director of Year-Round Fruit Production for Nutrition Improvement under Department of Agriculture Extension (DAE), told the Daily Sun that different varieties of orange are being grown by the orchard owners.

“Khasia mandarin, Australian mandarin, Vietnamese mandarin, Thai, American Naval, Darjeeling and some other mandarin varieties of orange are being cultivated in the country,” he said, adding that orange was earlier cultivated only in the hilly regions.

Due to the sweetness, demand and higher production people started growing the fruit on a massive scale across the country.

Many orchard owners started to cultivate the high-value crops being informed about its profit in successful commercial cultivation in the country.

Not only the commercial cultivation, but many people have also cultivated Malta in their home yard, balcony and roof in almost all the districts.

Asaduzzaman, an orchard owner at Boda in Panchagarh, said he got plenty of production from Darjeeling variety of orange and sold at Tk 80-90 per kg at growers level.

Farmers can cultivate the fruits on vacant lands those are not used for regular farming.

“Production of orange is around 15-20 tonnes per hector in the country,” the DAE official said, adding “Local cultivation has reduced the dependency on foreign orange and we are expecting to start exporting this fruit in 10 years.”

Price of local orange was Tk 90-120 per kg in the capital and elsewhere of the country while the sweetness of locally produced orange has won the heart of people, traders said.

Shamsul Alam, an orchard owner at Ghatail in Tangail, said he planted 300 orange trees in 2017 and harvesting orange for the last two years.

He said the yields were good as each plant bears around 200-300 oranges per year.

“Fruit-bearing capacity gradually increases with the maturity of the plants,” he said.

Production of orange was 46,522 tonnes from 4,080 hectors of land in FY 2018-19 in the country, according to the Department of Agriculture Extension (DAE) data.