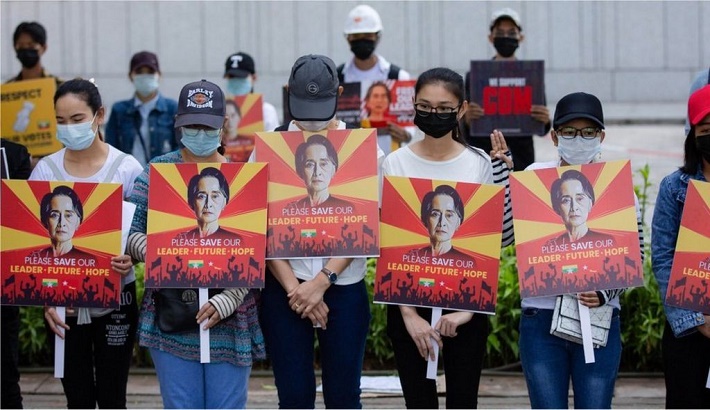 People in Myanmar are reacting with defiance as authorities use night-time raids to arrest opponents of the military coup.

Mass protests have taken place since the military seized control of the South East Asian country on February 1.

The army announced on Saturday that arrest warrants had been issued for seven prominent opposition campaigners.

They are wanted under the rarely used charge of "disturbing tranquillity". One of them, Min Ko Naing, was one of the student leaders involved in the failed 1988 uprising against the then-military dictator. He has appeared in a social media video denouncing the use of night-time raids to make arrests.

The United Nations human rights office said on Friday that more than 350 people had been arrested since the coup.

BBC Burmese journalist Nyein Chan Aye said people in Myanmar were feeling "extremely insecure, anxious and uncertain about what will happen next".

"Sleepless nights are becoming common here in Myanmar. Security forces are raiding people's residences in many places across the country and trying to arrest those who are against the military junta. People are protecting each other, staying up late at night," he said.

In the country's biggest city, Yangon, footage showed people chanting and alerting neighbours as security vehicles approached. In a video shared with Reuters news agency, crowds could be seen surrounding and marching alongside police vehicles.

The videographer told the news agency the crowd had at least once made the police turn back from driving in the direction of West Yangon Hospital.

Other footage showed people gathering in Yangon to demand the release of a teacher who had reportedly been detained, and banging pots and pans when they thought police units were conducting raids to arrest people.

As people took to the streets for the eighth consecutive day on Saturday, protesters chanted: "Stop arresting people at night-time."

Phil Robertson, the deputy director of Human Rights Watch's Asia division, told the BBC there were "more and more night-time raids" taking place in Myanmar, in which people were dragged from their homes in the middle of the night.

"We have neighbourhoods now who are trying to organise. They're using pot banging when it looks like the police or military are coming into the area. It really has become a situation where the crackdown is now going after anybody that the military identifies as leaders of these protests," he said.

"Family members are left with no knowledge of the charges, location, or condition of their loved ones. These are not isolated incidents, and night-time raids are targeting dissenting voices," it said in a statement.

Myanmar, also known as Burma, was long considered a pariah state while under the rule of an oppressive military junta from 1962 to 2011

A gradual liberalisation began in 2010, leading to free elections in 2015 and the installation of a government led by veteran opposition leader Aung San Suu Kyi the following year

An army operation against alleged terrorists in Rakhine State has since driven more than half a million Muslim Rohingyas to flee to neighbouring Bangladesh, in what the UN called a "textbook example of ethnic cleansing"