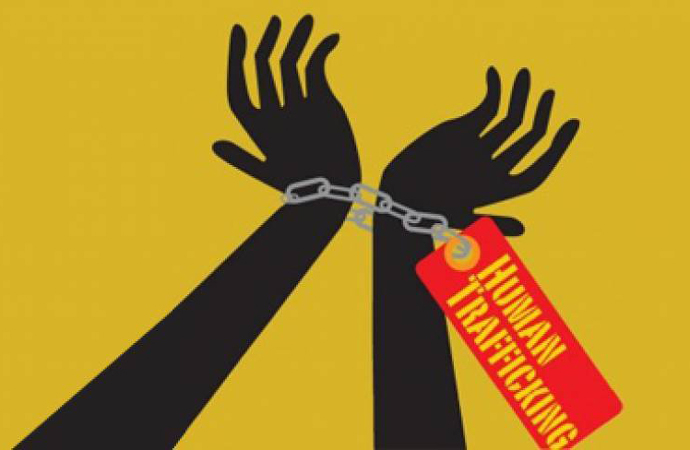 The alleged ringleader of an international human trafficking gang that trafficked many fortune-seekers to Sri Lanka and held them captive at jungles of the island country, is still at large although he was wanted in several cases.

Shah Newaz alias Rajib alias SM Golden Shoyeb, the kingpin of the racket and son of Shaheed Master, is accused in at least six cases. Hailing from Waru in Nabinagar upazila of Brahmanbaria district, he has been residing in Dakkhinkhan of the capital.

The investigation officers (IOs) of the cases said they were not looking into the matter as the Criminal Investigation Department (CID) has taken over it.

The cases were filed with Dakkhinkhan and Vatara police stations under Dhaka Metropolitan Police (DMP) and Kasba and Nabinagar police stations in Brahmanbaria and a Dhaka court.

In another case filed with Uttara East Police Station under the DMP, the name of Shah Newaz was not mentioned but kept as an unknown person.

Some of the victims, including Al Amin Bhuiyan, Mohammad Ahsan Habib and Hasan, lodged the cases. Some of the cases were filed about two years ago while the rest 1-3 months back.

At least 25 Bangladeshi job-seekers have been held captive in a jungle of Sri Lanka by the international human trafficking racket for ransom, according to the CID.

The matter came to the fore after Ahsan Habib, 24, who managed to flee the jungle and returned to Bangladesh recently, lodged a complaint with the CID.

CID sources said they have been investigating the matter. After investigation, they will bring all the accused involved in the crime to book, they said.

“We’re investigation the matter. Everyone involved in the crime will be brought to book,” CID Inspector Rezaul Karim, also the IO of a case, told the Daily Sun.

About the whereabouts of the 25 Bangladeshi job-seekers, he said they are yet to identify them. “We’re trying to know about them. After identifying them, we’ll seek the help of Sri Lankan police to trace them,” he said.

The trafficking gang is comprised of 100-150 members of different countries, including Bangladesh, India, Sri Lanka and the Maldives, said sources in the CID. Shah Newaz is leading the Bangladeshi members of the racket, they said.

The gang trafficked numerous job-seekers to Sri Lanka via India and held them hostage at jungles. Later, they collected ransom from their families.

Ahsan Habib, son of late Abdur Rob of Haturabari in Kasba, was taken to Sri Lanka in the name of being sent to Malta in Europe.

Following the complaint lodged by the youth, a CID team arrested four members of the racket from Uttara in the capital on January 6.

However, Shah Newaz, Sumon, Shamima Akhter Munni, wife of Mamunur, and others were not arrested for unknown reasons, alleged Ahsan.

He said he wanted to make Shah Newaz accused in the case he filed with Uttara East Police Station on January 6, but police did not allow him to do so. Instead, he acted how they told him to do.

“Shah Newaz is trying to flee to Malaysia. He was scheduled to leave the country on a flight from Hazrat Shahjalal International Airport on Friday night. I requested police again and again to prevent him from fleeing the country but they didn’t do so. Later, I approached a senior government official who managed to prevent him.”

Al Amin Bhuiyan, one of the victims, said, “I gave Shah Newaz Tk 27.03 lakh for sending me and some of my relatives to Egypt, but he neither sent us there nor returned the money.”

He filed two cases against the lynchpin and some of his associates with a Dhaka court and Dakkhinkhan Police Station, but police did not arrest them.

Al Amin alleged that Munni, a member of the gang, filed a robbery case against him and Ahsan with Dakkhinkhan Police Station being angered at the cases they filed against the gang members.

Contacted, sub-inspector of Dakkhinkhan Police Station Mohammad Tazib, also IO of one of the cases, told the Daily Sun that he kept himself away from the probe as the CID is looking into the matter.

Shah Newaz could not be contacted for his comments despite several attempts over phone.