Mehidy not getting complacent with new feat 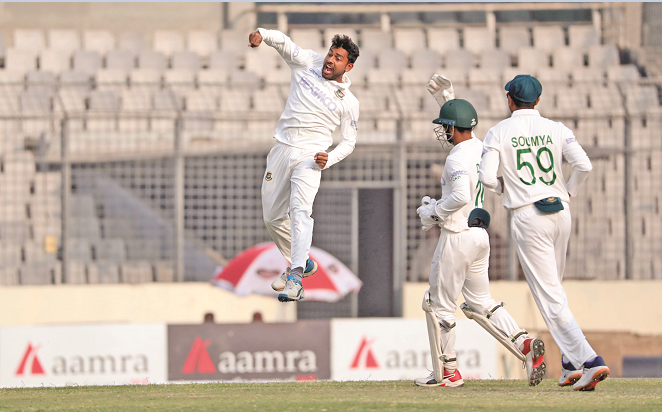 Bangladesh all-rounder Mehidy Hasan doesn’t want to set any personal milestone goal as he believes it will only be an added pressure to his performance in international cricket.

Mehidy created a new milestone on Saturday as he became the quickest 100-wicket taker for Bangladesh in the longer-format.

Mehidy completed the feat while dismissing Sheyne Moseley, who gave a catch to Mithun at second slip in the second innings of West Indies, which turned out to be the 100th scalp of the off-spinner in Test cricket.

The 23-year old took only 24 Tests and 41 innings to achieve the landmark as he overtook fellow left-arm spinner Taijul Islam, who did it in his 25th Test and 45 innings.

“Nobody can say about the future. But I want to go a long way. I can’t say how many wickets I want to take or how many runs I want to score. I think if I set the goal, it will be extra pressure,” Mehidy said after the end of the third day’s play.

Earlier, Mehidy scored 57 runs in the first innings to help Bangladesh avoid the follow-on and score 296 runs against West Indies after Tigers left struggling at 155-6.

It was Mehidy’s second 50-plus innings in the Test series, who, earlier completed his maiden Test ton in the Chattogram Test along with picking eight wickets.

“I personally believe that I can bat well. I hope I can always contribute with the bat for the team,” he said.

West Indies have already taken a lead of 154 runs and Mehidy said they would be targeting to bowl the visitors out as early as possible on the fourth day.