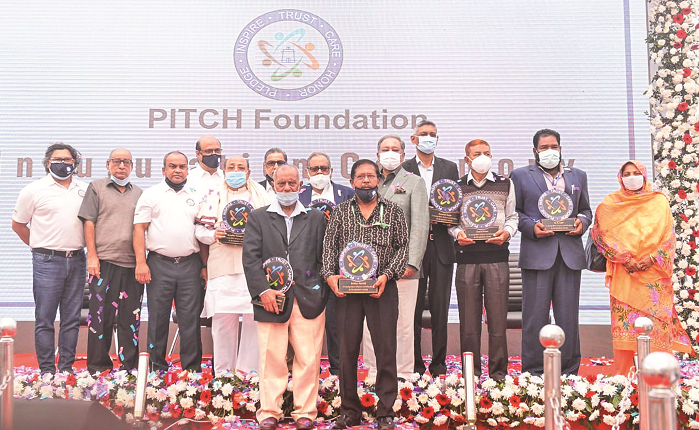 The inauguration ceremony of PITCH Foundation, a voluntary organisation to support the game of cricket, was held on Saturday at the Sher-e-Bangla National Cricket Stadium in the capital.

Bangladesh Cricket Board President Nazmul Hassan Papon launched the organisation as the chief guest of the programme while several distinguished sports personalities, organisers and other guests were present on the occasion.

PITCH Foundation honoured Shaheed Sheikh Kamal, the eldest son of the Father of the Nation Bangabandhu Sheikh Mujibur Rahman for his contribution to the game during the programme.

PITCH Foundation also provided financial assistance of Tk two lakhs to the wife of Syed Abdul Ahad Junu and Abdul Hadi Ratan for their involvement with the game during their launching ceremony.

“This is something which should have come from the board (Bangladesh Cricket Board),” Nazmul said during his speech.

“We do come in help of individuals during their struggle but we don't have a platform which the PITCH Foundation has come up with. It is indeed a great initiative as it will ensure support to those who have contributed for the game in the country,” he added.

PITCH Foundation General Secretary Obeid R Nizam recalled the contributions of several former cricketers, organisers, coaches in developing the game in Bangladesh and was optimistic to continue their support to them.

“A countless number of individuals who have worked tirelessly throughout their lives for the game are now in need of support. This is where PITCH Foundation wants to step in,” Obeid said during his opening speech.

“This is where we pledge to make a difference, this is where we want to inspire others to trust our cause to care for and honour those who have given the game so much,” he added.