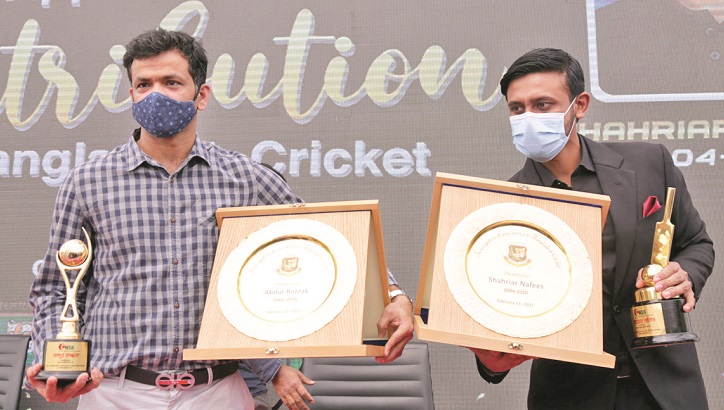 Abdur Razzak and Shahriar Nafees pose for a photo after a farewell at the Sher-e-Bangla National Stadium on Saturday. – BCB PHOTO

Former national cricketers – Abdur Razzak and Shahriar Nafees on Saturday announced their retirement from all forms of cricket as they have taken different roles in Bangladesh Cricket Board administration.

Razzak has already been announced as the third member of the national selection panel while Nafees is expected to join as the deputy manager of cricket operations of BCB.

The left-arm spinner took a total of 279 wickets during his international tenure including 207 wickets in one-day internationals, third-highest amongst Bangladeshi bowlers after Mashrafe Mortaza and Shakib Al Hasan.

Razzak is the most successful Bangladeshi bowler in first-class cricket, picking up the highest 634 wickets while he also finished with 412 List A wickets.

Razzak expressed his gratitude towards his coaches Nazmul Abedin and Sarowar Imran during his speech after both he and Nafees were felicitated by Cricketers Welfare Association of Bangladesh.

“It is only natural that someone else will take my place because everything comes to an end. I would like to thank my childhood coaches Sarwar Imran and Nazmul Abedin Fahim. I met them when I was 13 years old and they changed my life,” Razzak said.

“I’m still in wonder considering even yesterday I could say that I am a cricketer but from today it will be a different story,” he added.

Nafees, the first-ever T20I skipper for Tigers, who played 24 Tests, 75 ODIs and one T20I represented Bangladesh national team last back in 2013.

During his national career, the 35-year old made 2201 runs in ODIs and 1267 runs in Tests, including a marvellous 138-run innings against Australia in Fatullah Test back in 2006.

Nafees said he is grateful to his parents as well as coach Wahidul Gani for coming this far.

“They (parents) supported me so I must thank them. I would like to thank my wife and kids, my in-laws, as well as my first coach Wahidul Gani,” said Nafees.

“I am having a different feeling and it is something like I am studying in a school and now left it,” he added.

“I have seen Abdur Razzak Raj playing cricket so much that I’m currently lost of words, with an immense nostalgic feeling and same with Shahriar Nafees, as well,” said Nazmul.

“There is a time when everyone has to say goodbye. As they have now made this decision but I would say they are lucky in one way or another.

“This is because they left playing cricket but they would still be around cricket. They will fill the posts of a national selector and as management personnel in Bangladesh Cricket Board. We are so lucky to be able to work with them,” he added.