Kings held for the first time in BPL 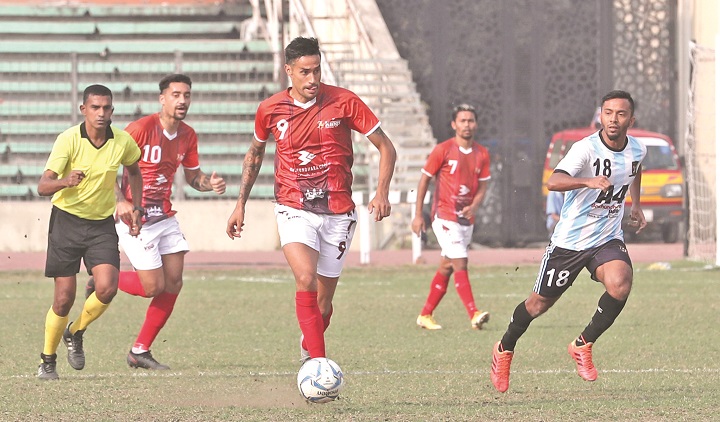 A Bashundhara Kings player runs with the ball against Sheikh Jamal Dhanmondi Club during their Bangladesh Premier League Football match at the Bangabandhu National Stadium in the capital on Saturday.

Defending champions Bashundhara Kings shared points for the first time in the ongoing Bangladesh Premier League as they played a goalless draw against Sheikh Jamal Dhanmondi Club Limited in their eighth match at the Bangabandhu National Stadium on Saturday.

Earlier, Bashundhara Kings won all their previous seven matches in the ongoing league and they also won five games on their way to becoming Federation Cup champions this season that extended their winning streak to 12 matches before the match.

Both teams tried to take control of the midfield in the first half but all of their efforts went in vain.

A left-footer by forward Mahbubur Rahman Sufil from inside the box was deflected by Sheikh Jamal captain Rezaul Karim in the 14th minute while Brazilian midfielder Jonathan da Silveira Fernandes Reis shot went off the target in the 38th minute.

Both sides tried hard in the second half to break the deadlock but remained goalless.

In the 88th minute of the game, Sheikh Jamal’s Gambian defender Pa Omar Jobe netted the ball utilizing a short pass from midfielder Zahid Hossain in a counter-attack.

However, referee Jalal Uddin signalled a foul in favour of Kings instead of the goal as Omar Jobe wrongfully tackled Kings captain Topu Barman nearer to the box.

In the day’s other matches, Sheikh Russel Krira Chakra conceded a shocking 1-2 defeat against Saif Sporting Club at the BNS while Dhaka Abahani Limited beat Arambagh Krira Sangha by 4-0 at the Birshreshtha Flight Lieutenant Matiur Rahman Stadium in Munshiganj.

Saif skipper Riyadul Hasan Rafi and their Uzbek midfielder Sirojiuddin Rakhmatullaev scored one each for the winners in the 57th and 74th minutes respectively after Sheikh Russel midfielder Abdullah gave his side the lead in the 20th minute.