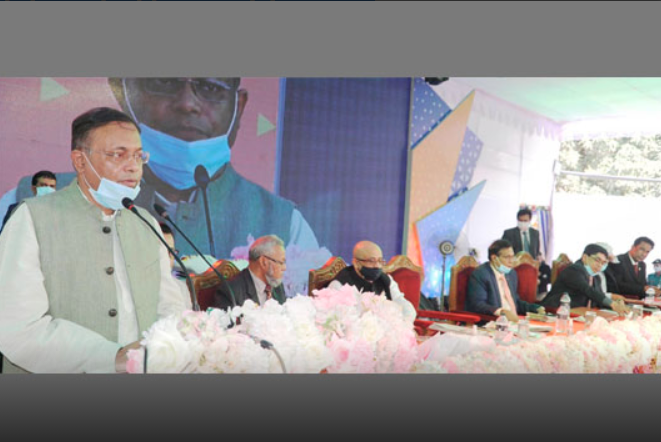 Awami League Joint General Secretary and Information Minister Dr Hasan Mahmud said on Saturday the role played Bangladesh Betar during the country’s independence movement is written in golden letters and will remain till existence of the country.

“The people who were audience of Swadhin Bangla Kendra know how the programmes inspired the freedom-loving persons during the period and the people were seemed waiting eagerly to listen to the programmes,” he told a discussion at Bangladesh Betar in capital’s Agargaon area.

The minister said MA Hannan, the then president of Chittagong Awami League, read out the declaration of independence given by Father of the Nation Bangabandhu Sheikh Mujibur Rahman from Kalurghat Betar Kendra on March 26, 1971.

“Later, on March 27, 1971, the then Awami League leaders wanted an army officer would read out the declaration. Major Rafique was contacted first but he was busy in the battlefield. Later, Major Ziaur Rahman, who was on his way to Patiya after crossing Kalurghat, was given the task of reading the proclamation,” he added.

The minister said at first he (Ziaur Rahman) read out the declaration wrongly. Later, he read out it correctly on behalf of Bangabandhu, Hasan said, adding that it is needed to let the new generation know the real history.

He said Swadhin Bangla Betar Kendra had also played a major role in the nation building activities in the post-independent era.

Radio is playing a very crucial role in nation building activities and many of the radio programs are very good and have a wide appeal to the masses in rural areas, said Hasan.

He said radio is the only resource of amusement for the boatmen in the Bay of Bengal. Even, listeners can hear it in the mountain too, he added.

The minister said radio has also been playing a pivotal role in creating awareness among the people during the COVID-19 situation.

Earlier, replying to a query about withdrawal of Bir Uttom title of Ziaur Rahman, Hasan said Ziaur Rahman had worked as Pakistani associate and the then Pakistani army officer wrote a letter to Zia praising his role in the Liberation War.

He said Ziaur Rahman rehabilitated those who sided with Pakistan against Bangladesh. He (Zia) made Shah Azizur Rahman as prime minister who did lobby to the United Nations as deputy leader of Pakistan and gave scope of doing politics to the war criminals, he added.

“In the guise of a freedom fighter, he in true sense acted as an ally of Pakistan. The final decision to cancel his title has not been made yet,” Hasan said.

Khaja Mia urged the officials of Bangladesh Betar to work devotedly for the welfare of common people.