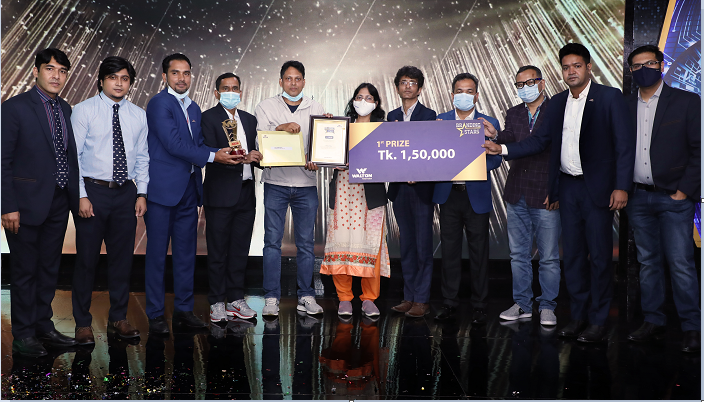 Country’s electronics giant Walton honoured 31 individuals and organisations with ‘Television Branding Stars Award’ as a recognition of their outstanding performance in promoting Walton TV and creating digital awareness among customers through conducting creative branding of the Digital Campaign.

Walton TV is conducting Digital Campaign across the country to accelerate its digital customer database initiative for delivering online based warranty and best after sales services swiftly.

During the campaign, customer’s name, contact number and Walton TVs’ model number have been stored on Walton server. As a result, television customers’ will not have to keep the warranty paper and also they will get the desired after sales service even. Customer database will also help the service center’s representatives getting customers’ feedback about their respective Walton products’ service.

To encourage customers’ participation in the campaign, the local brand has been offered guaranteed discounts up to 50 percent on the purchase of any model of Walton LED TV, Smart TV and Voice Control Smart TV.

Walton sales team’s representatives have been branding the campaign through Walton Plazas as well as distributors across the country. Among them, 31 individuals as well as organisations were honored with with ‘Television Branding Stars Award’ in three category of area manager, regional sales manager and divisional market monitor.

Walton TV’s Chief Executive Officer Engineer Mostafa Nahid Hossain said that the demands and sales of Walton television across the country were returned to upward trend surpassing the negative impact of coronavirus pandemic. Towards the great success, he thought that customers’ sound responses towards Walton TV’s digital campaign following creative branding made a conducive role. And thus, he added, they awarded 31 individuals and oraganisations with the ‘Television Branding Stars Awards’ as a recognition of their endless effort for promoting  Walton TV through the campaign.

Like the domestic market, Walton TV has been making successful footprints on the global market as well, said Walton TV’s CEO.

Despite COVID-19 pandemic situation across the world, Walton posted great success in the market expansion of its locally finished television export market to the European countries like Denmark, Germany, Poland, Greece, Spain and Croatia.

As a result, Walton registered 10 times higher exports of television in 2020 compared to the previous year’s TV export.

This year, he said, Walton set a target of expanding the export markets of its ‘Made in Bangladesh’ labelled television to more than 20 new countries, including America, Australia and some European countries.

At now, Walton made television has been exported to over 35 countries.