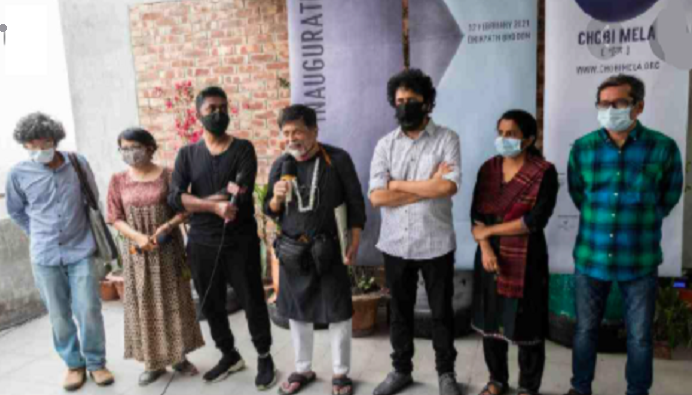 Organised by Drik Picture Library and Pathshala South Asian Media Institute, the special hybrid edition of the biggest photography festival in the country is being called 'Shunno' (Zero) this year.

Marking the inauguration, an opening rally was organised on the premises of DrikPath Bhaban on Friday afternoon.

Festival director Tanzim Wahab said, "We are calling this special edition 'Shunno' (Zero) to honour the fact that this is a new beginning for all of us, in this unprecedented times. The pandemic driven last year took away many people from us, including architect Bashirul Huq and Sayeeda Khanam, the first female photographer of the country. Commemorating their legacies, we are holding two exhibitions focused on their works this year."

'Chobi Mela Shunno' is being joined by a total of 75 artists from countries representing South Asia, this year. Alongside host nation Bangladesh, artists from India, Nepal, Pakistan and Sri Lanka are virtually participating at the event.

The photographs are being showcased under eight projects in a total of eight segments, namely Off-Limits, The Rebel with A Smile, Wishing Tree, Frozen Song, Crossroads Collectives’ Intervention, Baba Betar, Chhapakhana Archive, Anatomies of Tongues and projects under the Chobi Mela Fellowship 2021, which was awarded to 14 young artists under the special segment curated by Zihan Karim titled 'Bodh', inspired from Jibanananda Das’s poem of the same name.

Photographic artworks from a total of 32 local and foreign artists are being showcased. Participating collectives are Cheragi Art Show (Jog Art Space) from Chattogram, Daagi Art Garage from Dhaka, Kali Collective from Dhaka and Colomboscope from Sri Lanka.

One of the major highlights in this year's edition is 'Baba Betar' by artist Arfun Ahmed, an experimental art-radio project which will be broadcast from the festival’s website for 10 consecutive days from 8 pm to 10 pm during the festival, right after the special 'Chobi Mela Shunno' podcast series, a conversation between international curator and writer Natasha Ginwala and British-Nigerian photographer Akinbode Akinbiyi at 7 pm.

'Chobi Mela Shunno' will conclude on February 21 and visitors can explore the festival daily from 11 pm to 8 pm.