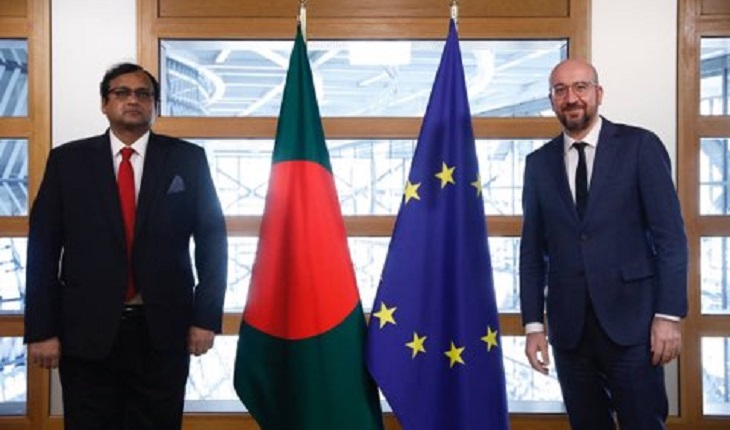 The European Council President Charles Michel reiterated the EU’s continued support to Bangladesh for a lasting and peaceful solution to the Rohingya humanitarian crisis.

He said this while Ambassador Mahbub Hassan Saleh, the newly appointed Head of Mission of Bangladesh to the EU, called on him to present his Letters of Credence on Friday (Feb 11).

President Michel recalled his previous meetings with Prime Minister Sheikh Hasina, including the last one held in Madrid in December 2019. Ambassador Saleh conveyed the warm greetings of President and Prime Minister of Bangladesh to the President of the European Council, said the Bangladesh Embassy in Brussels.

Ambassador Saleh stressed the need for Myanmar authorities to take credible measures to generate confidence among the forcibly displaced Rohingyas, temporarily sheltered in Bangladesh, for their safe, dignified and sustainable return to the Rakhine State.

Ambassador Saleh suggested establishing a dedicated bilateral platform between Bangladesh and the EU for exchanging views and working more closely to address the challenges of climate change.

He also suggested holding a CVF-EU Leaders’ Meeting, in person or virtual, during the lead up to UNFCCC COP-26 in the UK later this year. President Michel responded positively to these suggestions.

The Bangladesh Ambassador underscored the need for expanding the scope of Bangladesh-EU Partnership beyond the traditional areas of mutual interest. President Michel expressed interest in further engaging on climate change, migration and human rights issues, among others.

The meeting took place following the existing health regulations in Belgium. The Ambassador was accompanied by Md. SafiulAzam, Counsellor (Commerce) and KanizFatema, First Secretary (Political), of the Mission.